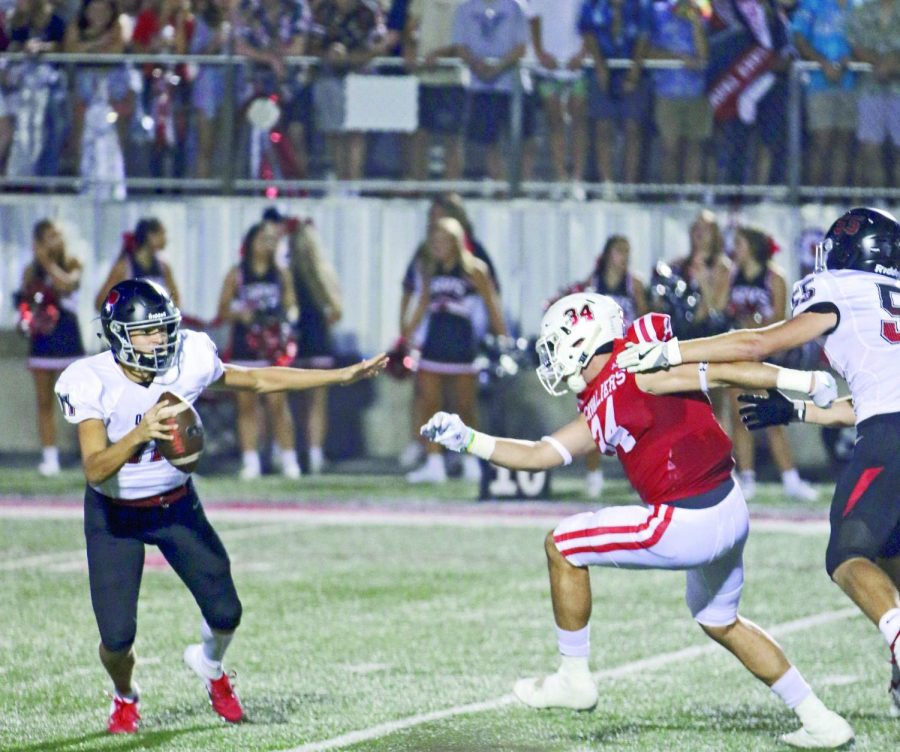 STAR PLAYER: Sophomore quarterback Diego Tello searches for a target as his opponent charges at him. Tello will be one of the varsity starting quarterbacks for the rest of this season.

After countless early morning practices, dozens of late night games, individual training, and two years of playing football for the Dawgs, sophomore quarterback Diego Tello has earned a spot on the varsity team.

“Diego is a really good kid,” athletic director Jeff Ables said. “He’s playing hard and doing everything we’ve asked him to do.

Tello found his love for football at a young age.

“I have been playing football since I was four,” Tello said. “I started playing because I loved watching [it] as a kid.”

As a freshman, Tello was moved up to JVA after starting quarterback Trinidad Sanders got injured.

“We moved Diego to the JVA last year to get him more prepared to play tougher competition,” Ables said. “We liked him and he did a really good job of grasping our offense. It’s just the experience factor and getting reps that will help him improve his game. ”

His coach-ability and intelligence allow him to compete with older players on the varsity level.

“I knew he was going to be an essential part of our offense in the next couple years,” junior wide receiver Thanio Bright said. “Diego has a strong arm, great mobility in and out of the pocket, and makes great decisions when it comes to options and read[ing the field].”

A huge number of seniors graduated from the team last year, so a lot more underclassmen are getting opportunities to play this year.

“We graduated 47 guys last year, so we only have 12 returning lettermen,” Ables said. “Players like Diego are going to have to grow up quick and step up. They’re doing well; they’re playing hard and doing the best they can, so that’s all we can ask of them.”

Tello has set big goals for himself to accomplish in the next two years.

“My goal for this year is to help my team win in any way,” Tello said. “Over the next two years I’m excited to lead the team, and the goal for us will be to [eventually] get to the state championship.”

Starting senior quarterback Trinidad Sanders injured his knee in the game against LT on September 13, so Tello will be one of the players stepping into his place as quarterback.

“Diego will definitely play at quarterback a good amount,” Ables said. “We hate to lose Trinidad, and it’s a big loss for us, but everybody is going to have to step up and play their best.”

With a major player injured and so many young players, Ables notes how this season will be very trying one for the team.

“The team is facing a little bit of adversity right now,” Ables said. “It’s like what I told the team at practice: when you go through adversity you find out what you’re made of. Ultimately, they’ll be closer together and stronger because of it, and they’ll be better because of it.”

Despite the challenges, Tello loves playing on varsity and being a part of the football program.

“I wouldn’t change anything [about football],” Tello said. “We have great coaches, and if everyone works hard this year, we will be a great team.”

The team is very close, which is one of the aspects Tello appreciates so much about football.

“My favorite part about playing for Bowie is getting to play with great teammates and coaches…[I want] to grow with my team and strengthen our brotherhood.”

After throwing his first touchdown against Lake Travis, Tello is excited for the upcoming games.

“I’m starting my first game on Thursday against Del Valle (Bowie won 38-21),” Tello said. “I will be ready to play any time my team needs me [on the field].”

He hopes to one day get committed and play college football.

“We take it one day at a time, and [he will] play a lot,” Ables said. “He has potential to start full time as a senior and later play in college.”

Tello has certainly made an impact on the varsity players and coaches, and he is expected to have a bright future in football.

“Diego is a future D1 quarterback; you heard it here first,” Bright said.

From dressing up all week to celebrating during the pep rally, Homecoming week has been a school tradition for decades. These activities all lead to the homecoming football game, where the king and queen are crowned and the student section cheers the varsity team on. This year, the student section participated in a “black out” theme, where everyone dressed in all black.

The final score against Del Valle was 35-7, with our team taking home the win. Seniors Anthony Simmons, Noah Camacho, and Cash Peters made the big plays of the game, leading the team to victory. Although the team won and has been undefeated this season, Senior Right Guard Chandler Classen believes the team is still growing and needs to prepare for their next game against Westlake.

“To prepare for the game, we watched film on the other team and made sure we had good practices”, Classen said. “I think we did good as a team, but there is always room for improvement. We need to clean up the little mistakes.”

Many seniors made posters and social media posts throughout the week, hoping to win the title of Homecoming king and queen. When the time came, Seniors Ellie Dusterhoft and Steven Davis’ hard work paid off, as they were named king and queen.

“I wanted to run because my birthday happened to be on the day of the game so I thought it would be a fun memory if I did win,” Dusterhoft said. “I was honestly surprisingly anxious about it before. I was really nervous about just walking in front of people which isn’t normal for me.”

The homecoming court is determined by a student vote. Voting took place the week before and the results for seniors were revealed at the game.

“I was really excited about it,” Dusterhoft said. “It was so fun, and having all my friends support me in the student section was honestly my favorite part. After the game we all hung out at Sonic with everyone to celebrate the win.” 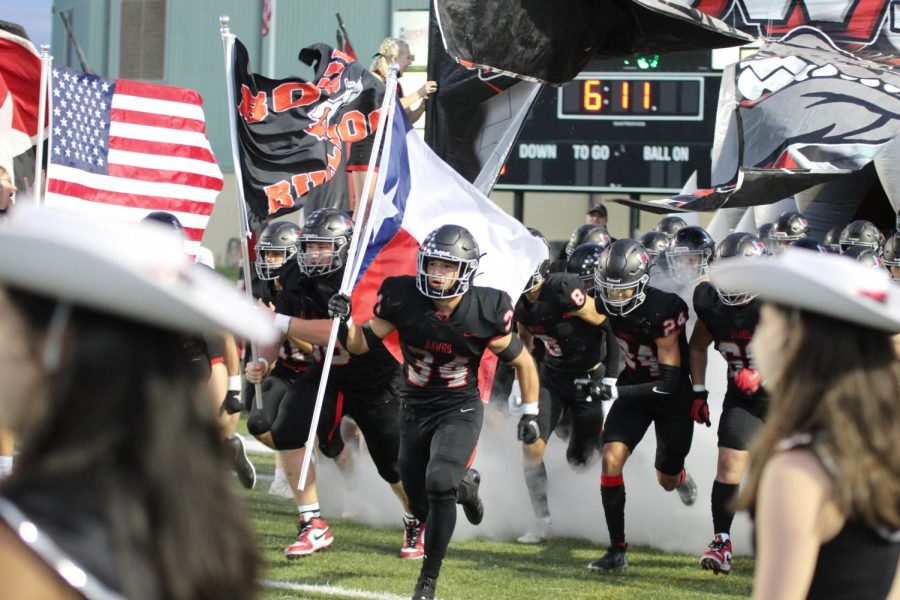 Gallery|7 Photos
Nick Wood
RUNNING DOWN THE FIELD: Senior Noah Camacho carries the Texas flag before the start of the homecoming game.
Leave a Comment