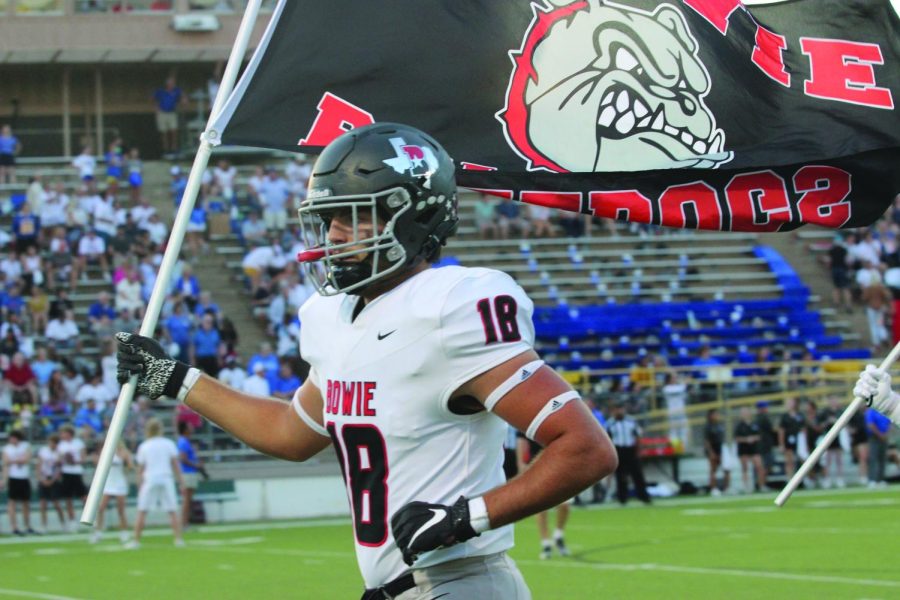 LEADING THE TEAM: Senior Aaron Gall leads the Bulldogs on to the field prior to their game. Gall committed to the Colorado School of Mines on a football scholarship.

Springing forward, senior defensive end Aaron Gall slams against the opposing team’s tackle, driving him back. Utilizing his superior technique and strength, Gall closes in on the sought-after quarterback, willing himself to record a sack for his team.
The student section howls their support, and coaches, high school and college alike, meticulously watch as Gall out-muscles his opponent on the line of scrimmage and displays his elite athleticism and speed to track down the quarterback, wrestling him to the ground.
Impressing collegiate-level coaches, Gall committed to the Colorado School of Mines, a top-end Division 2 school playing in the Rocky Mountain Athletic Conference, at the beginning of his senior season for the Bulldogs. Attending camps and officially visiting college campuses to evaluate their football facilities, Gall describes the process of putting himself in a position to be recruited for college football.
“I started getting looked at and communicating with colleges after my junior year,” Gall said. “I thought I could go to college for football, so I started pursuing it more and going to camps.”
Gall’s collegiate commitment goes beyond football, as he mentions his desire to pursue a career in engineering.
“That’s what I want to do,” Gall said. “I want to do engineering, and all the coaches and players at the Colorado School of Mines were so nice to me, so that’s what attracted me to them.”
As a leader of the Bulldog defense, Gall was elected captain by his teammates and coaches. Aspiring to command his teammates to be one of the best defenses in the state, Gall talks about the pressure of performing and leading by example during his senior campaign.
“Because I have the standard of being the captain, I have to play well every game and lead my teammates,” Gall said. “Trying to meet the standards is always kind of stressful.”
The weight of being a captain is compounded by the need to be a role model to the younger players who are the program’s future. Sophomore linebacker Reagan Cooper is among the many impacted by Gall’s leadership.
“The most impressive thing about Aaron is he plays both sides of the ball,” Cooper said. “He takes very little breaks and still makes big plays. Aaron is one of the guys I look up to because he has taught me to keep my head up and keep pushing.”
Having seen the process of Gall’s development as a student-athlete throughout high school, varsity coach Solomon Perdue echoes Cooper’s praise for Gall’s versatility.
“What impresses me about Aaron is his ability to play and contribute on all three phases of our team,” Perdue said. “Whether that is defense, offense, and special teams, he does it all.”
Gall has selflessly taken offensive, and special teams snaps in order to help the team. Perdue builds on Gall’s ability to put the team first by explaining the determination throughout the Bulldogs to win, even if it means sacrificing personal gain.
“Our football team this year is very similar to our team last year,” Perdue said. “We have a group of unselfish players who are willing to play for each other every week.”
Similarly to coach Perdue’s viewpoint, Gall believes that the team’s success stems from their family-like connection, hinting that their past and future wins are impossible without the bond shared between the players and coaching staff.
“The goal is to get some sort of achievement in the district,” Gall said. “After that we are trying to go far in the playoffs again this year. That’s only possible because this team is a brotherhood.”
In his final season as a Bulldog, Coach Perdue reminisces about Gall’s time at Bowie, commending him for traits that transfer outside of football.
“Aaron has a different mentality on the field and a motor that cannot be coached,” Perdue said. “I’m very blessed to be a part of Aaron’s journey over the course of these four years, not just as a football player, but also as a young man who will excel in anything he puts his mind to.”

At the midpoint of the season, the ‘Dawgs football team has jumped out to four wins and only one loss, as they recently fell to a highly ranked Dripping Springs squad in their third district game. With wins over Vista Ridge, Cedar Ridge, Del Valle and Anderson, the Bulldogs have set themselves up for an early playoff berth.

Aside from Dripping Springs, the ‘Dawgs have been dominating every team they faced. Big wins such as 64-0 against Del Valle and a 34-13 win against Cedar Ridge prove the offense has been electric this whole year, both on the ground and in the air. Senior running back Max Barnes and senior quarterback Connor Kenyon have been the focal point of the ‘Dawgs offense.

Barnes has been running very efficiently, rushing for an average of 127 yards per game and has recorded 11 total touchdowns in the first five games of the season.

Senior Connor Kenyon, the team’s returning quarterback, has thrown for 1,068 passing yards and 12 touchdowns, all while completing 57% of his passes with a 121.2 quarterback rating.

Kenyon’s favorite target this year has been breakout senior, Nehemiah Smith-Livingston, who has had 393 yards with six receiving touchdowns. Outside of Smith-Livingston, the rest of the Bowie receiving core has been playing great. Senior Jacob Kastl has brought in 164 receiving yards, averaging 23.4 yards per receptions through three games. Additionally, junior wide receiver Carmine Elisarraraz has been excellent all year, catching 15 receptions for 194 yards and two receiving touchdowns.

On defense, the Bulldogs have sacked the opposing team’s quarterback 17.5 times and reigned in 28 tackles for loss through the first five games. Leading the ‘Dawgs defense, senior linebacker Brady Bram has had a killer year with 36 total tackles and two sacks.

Another defensive leader for the ‘Dawgs defense is senior safety Wesley York, who has intercepted the ball three times, which ranks him second in the district for interceptions.

On the defensive line, senior defensive end Aaron Gall has been an anchor on this defense. With four sacks, 24 total tackles, 10 of which were solo tackles, Gall has been the team’s defensive standout in his final year before continuing his football career at the Colorado School of Mines.

Now, the ‘Dawgs have five more games, all of which are district match-ups. The remaining games are of great importance, as they determine the playoff seeding and the winner of the district.

Facing off against Austin High, Johnson, Akins, Westlake, and Lake Travis, the Bulldogs look to capitalize on their upcoming games.

I project that we will finish the second half of the season with a record of 3-2 (three wins and two losses), with blowout wins over Austin High School and Akins High School. I also think the ‘Dawgs will beat Johnson, winning by one or two touchdowns. Unfortunately, I think the Bulldogs will suffer substantial losses against the Texas high school blue blood, Westlake High School and Lake Travis High School.

Overall, I think we finish the year with a 7-3 record, finishing fourth in the district and squeezing into the playoffs.

At the midpoint of the season, the 'Dawgs football team has jumped out to four wins and only one loss, as they recently fell to a highly ranked Drippi... 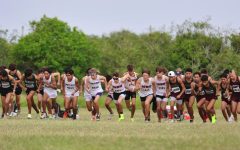 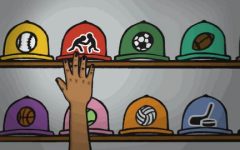 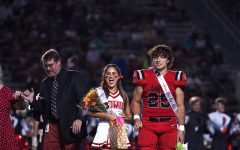