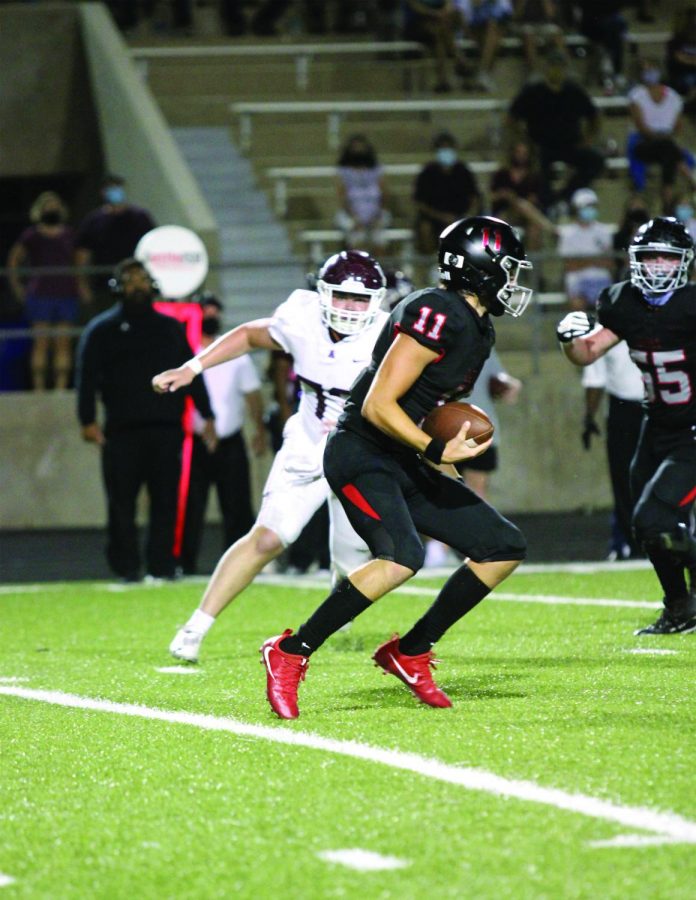 ON THE RUN: Senior quarterback Diego Tello escapes the rush against the Austin High Maroons in the 2020 season. This year, Tello is out of playing due to a collarbone injury.

Students receive offers from prestigious colleges to continue their sports

Sweat, blood and tears aren’t unusual for these prestigious athletes. There’s an immense number of high school athletes who dream of playing at this fierce level. Here at Bowie there’s a selective few who’ve earned the opportunity to play Division I  sports throughout college.

Senior volleyball player Katherine Crosley has committed to Tulane University, senior football player Diego Tello, who has decided to play at the University of Texas at San Antonio, and junior baseball player Ben Merriman who has chosen to play at Texas State University. Their choice will further their sports and education at a high level.

“I am looking forward to playing for a successful volleyball team and being around players who are motivated and really want to get better,” Crosley said. “I think that energy is really contagious and will push me to be the best I can be.

The quality of academics student athletes will receive at college is another aspect of being a Division I athlete.

“When I was looking at what colleges I was interested in, I had a list of requirements that were super important to me: academics, location, size, and program,” Crosley said. “After learning about Tulane I realized it checked every box for me. I was born in New Orleans and my entire family lives there, so I’m excited to be closer to my family. My dad graduated from Tulane, my uncle played football there, and my grandpa was a professor there, so it’s exciting to keep it in the family.”

The competitive nature of select sports prepares athletes for college to be able to join a new team with players they’ve never met before and pursue the goal of winning.

“I think that playing club volleyball has really helped me to prepare for the college level,” Crosley said. “Club volleyball brings a new level of intensity that you can’t get at the high school level. I think that mentally will definitely be a big transition for me, especially being away from home.”

Playing at the highest level of college athletics provides an opportunity for high school athletes to showcase their skills.

“Entering high school my main goal was to just improve my skills and figure out if this is something I want to continue into college,” Crosley said. “I achieved this goal by putting in work on and off the court in order to realize I really wanted to play in college.”

The mental aspect of changing playing fields from high school to college athletics is almost as important as the physical for Tello.

“I think work ethic is what will help me at the next level,” Tello said. “Every day I will have to strive to get better and continue to learn.”

Athletes always have goals and a certain mindset to stay locked in. Merriman had focused on improving his game in every area he could work on to get attention from a school.

“It wasn’t an immediate choice to commit to Texas State, since I was very young and I wanted to see how things played out,” Merriman said. “I made the decision because I love the culture at the university and the coaching staff has treated me great.”

Each individual student athlete will learn in both the classroom and at practice. These will be things student’s will have to juggle while being in college.

“My dream would be to have a better perception about the game of baseball itself and also learn how to deal with adversity and grow from it,” Merriman said.

I think work ethic is what will help me at the next level. Everyday I will have to strive to get better and continue to learn.”

Commits have lots of new challenges to face joining a new team. Each student athlete will be facing the challenge of working with a new team, coach, and are while maintaining their studies.

“I’m looking forward to being able to play with the experienced ball players and being able to learn from them,” Merriman said. “I also want to do whatever I can to help this team win lots of ball games.”

Bowie head baseball Coach Sam Degeila has been coaching Ben Merriman and former Division I athletes  throughout his coaching career.

“Ben’s a good hearted kid that any coach would be happy to have 26 of him on the team,” Degeila said. “Ben’s been a quiet guy that’s starting to come out of the shell”, but he’s a competitor. His competitiveness translates on the field being a silent leader. He leads the team by example.”

Being a coach for so long, Degeila has seen the change of the mental focus of athletes once they commit to a college.

“Several times as a head coach I’ve seen these committed players and sometimes even seniors, and then they check out and stop working as hard,” Degeila said.”Every player has a role and it needs to be filled no matter who they are or what they’ve done.” 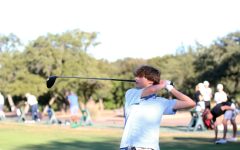 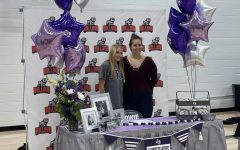 Bowie going for glory in Round Rock

At the midpoint of the season, the 'Dawgs football team has jumped out to four wins and only one loss, as they recently fell to a highly ranked Drippi...