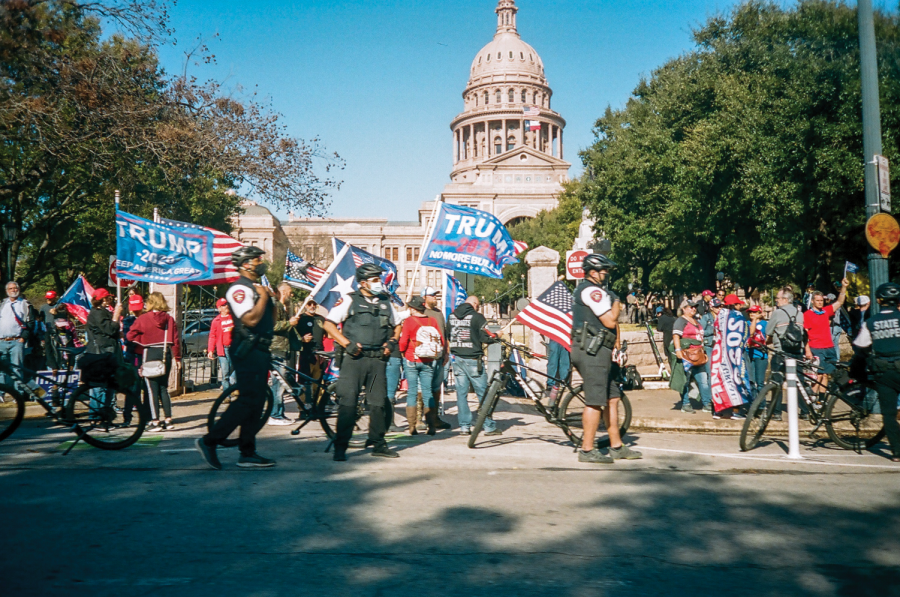 CHAOS AT THE CAPITOL: President Donald Trump supporters gathered to protest the inauguration of Joe Biden. These protests were based on claims made by President Trump of a fraudulent election. “I do not think protesting the election results is justified or effective, however I think the issue is bigger than those who are protesting,” senior Alyssa Shumaker said. “They have been misled and misinformed to the point of complete disillusionment of the entire election. The real problem with the protests is those in power who are spreading lies and empowering people to commit crimes based on false information.”

Election protests at the State Capitol

to the Inauguration of President Joe Biden and Vice President Kamala Harris, supporters of Donald Trump gathered at the Texas State Capitol downtown. Some of these protests had been planned in advance for various reasons such as advocating for gun rights and to show disapproval of COVID restrictions as the city enters stage 5. Junior Connor McClellan supports the relaxation of COVID restrictions as well as values the second amendment.

“I think at this point COVID-19 restrictions should be gone and people should return to their normal lives,” McClellan said. “Considering the number of hospitalization cases and the number of people who actually get very sick. It’s time to move on. As for gun rights I want to be able to protect myself and my family when I am able to purchase a firearm. For Biden’s campaign I am not too sure of his plans for restrictions for gun rights but I could see him trying to place restrictions.

On the actual day of the inauguration of President Biden, supporters of the outgoing president gathered because of fraudulent concerns believing that Trump had won the presidency.

“While I think this past election was a little bit fishy based on certain security footage being released at the ballot offices, I think it isn’t the most efficient thing to protest what has already happened,” McClellan said. “Sure you get the media to see that people are upset, and you demonstrate your freedom of speech, but after a presidential election whether it be a blue or red state it is not going to change the results.”

Junior Kody Coiboin believes that there shouldn’t be protests or beliefs that this election was fraudulent and that the reason there is any is because President Trump convinced his supporters it was with baseless claims.

“It wasn’t stolen,” Cobain said. “There was a recount. It was a normal election. “The reason some people thought it was stolen was both because Trump said it was and because votes came in overnight for Biden. This is because they were mail-in votes and most people who voted by mail voted for Biden.”

President Trump is currently on trial for inciting the riot that took place at the Capitol by spreading these claims of a fraudulent election and encouraging his supporters to fight. Senior Alyssa Shumaker thinks this is still an important procedure.

“Had he not spread election misinformation and lies as well as used violent and inflammatory language at the Save America Rally, the insurrection at the capital would not have occurred and those lives would not have been lost,” Shumaker said. “Losing lives over a hurt ego and refusal to acknowledge truth should not be tolerated in public officials of any level and Trump should not be allowed to hold office again.”

Contrary to that belief, McClellan thinks that President Trump shouldn’t be impeached since he is no longer the sitting President.

“Since Trump already left office I think that people shouldn’t bother impeaching him and in doing so it just seems like they are just out to get him even after he served his term,” McClellan said. “And for political issues like impeachment only the facts should be looked at, emotion can help the case but it should not be the determining factor for impeachment.”

Similarly Coibion thinks President Trump shouldn’t be impeached since he has left office but believes he still should be charged for his actions or lack of on Jan. 6.

“Trump should face criminal charges for inciting a riot and treason, thus preventing him from running in the future,” Coibion said.

As for the future and the Presidents who will take office after Trump, expectations are varied. Shumaker hopes politics will return to how they were prior to the Trump presidency.

“I think that the biggest development from Trump’s presidency is the growth of conspiracy and distrust of officials and media,” Shumaker said. “I hope that we will be able to return to a more trusting and transparent future with other presidents who will no encourage conspiracy and instead will ensure Americans that they are being told the truth.”