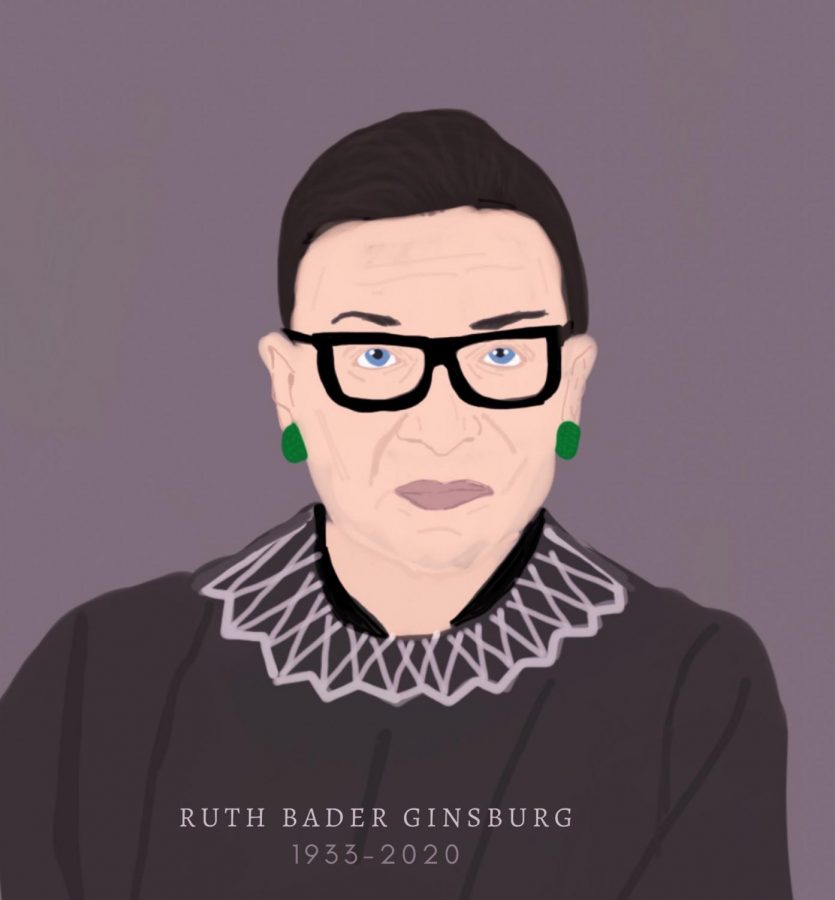 Supreme Court Justice Ruth Bader Ginsburg passed away on Friday, September 18. Ginsburg will be the first woman and Jew to be buried in state at the Capitol.

On Friday, September 25, Supreme Court Justice Ruth Bader Ginsburg was laid to rest in the United States Capitol. She is the first woman to receive this honor, which is extremely fitting for her life and legacy. Ginsburg’s death was a loss felt throughout the nation, some not only mourning the loss of a feminist icon, but also the loss of a liberal seat in the Supreme Court. The Constitution states that the current President nominates the next Supreme Court Justice.

The situation is similar in many ways to the events in February of 2016 when Justice Antonin Scalia died. The president at the time, Barack Obama, was blocked from filling the seat left by Scalia due to Senate Republicans insisting that the seat should not be filled since it was an election year. However, the election was nine months away, which would have given President Obama plenty of time to fill the seat accordingly. It’s no surprise that Republicans, like Senate majority leader Mitch Mcconnell, have suddenly had a change of heart now that conservatives have the chance to install three Supreme Court Justices in one presidential term.

If conservatives are allowed to fill Ginsburg’s seat, it won’t matter how wildly unpopular their policies are or if Trump wins another term. They will have already won the Supreme Court majority giving them the ability to restrict abortion, gay marriage, voting rights, and environmental policies. Republicans should stick by what they said in 2016 and let the American people decide first, although it’s hard to believe they will.

Democrats, along with Ginsburg’s family, have reminded the public that the Justice’s dying wish was for a new president to replace her. Although this contingency is irrelevant in the eyes of the law, it’s important to note how much Ginsburg would have hated the idea of a Trump nominee replacing her. Ginsburg stated in 2016 that she thought Trump was a “faker” and “ [he] has no consistency.” She later apologized for these remarks, as she felt a Supreme Court Judge shouldn’t share their personal opinions on Presidential candidates. However, she never commented on if she still agreed with her original statements.

Ginsburg went through many stages in her career. The Brooklyn-born lawyer was constantly fighting an uphill battle for women’s equality. Whether it was her work in the seventies at ACLU, in the eighties on the Court of Appeals, or as a Supreme Court Justice, the woman had an extensive career fighting for liberal ideals.

The hypocrisy from republican elites is nowhere near surprising, in fact, it’s predictable. They will do anything they can to get a conservative on the Supreme Court before the election and it’s pretty obvious why, and no, it has nothing to do with upholding the constitution. Republicans know Trump’s chances at reelection are slim, so they are setting up as many safety nets as they can. Most conservatives have already labeled mail-in voting as fraudulent within their base and now, if there are any recount disputes, a republican majority Supreme Court will oversee the case.

Sadly, there’s not much Democrats can do. Speaker of the House of Representatives Nancy Pelosi has said she hasn’t ruled out impeachment as a way to delay the SCOTUS vote, but the idea is pretty far-fetched. The only way the vote could possibly get delayed is if Republican senators decide to go against their party and hold themselves to the same standard they held Obama to in 2016. Although that seems unlikely, students should make their voice known by emailing their senator and of course, voting.