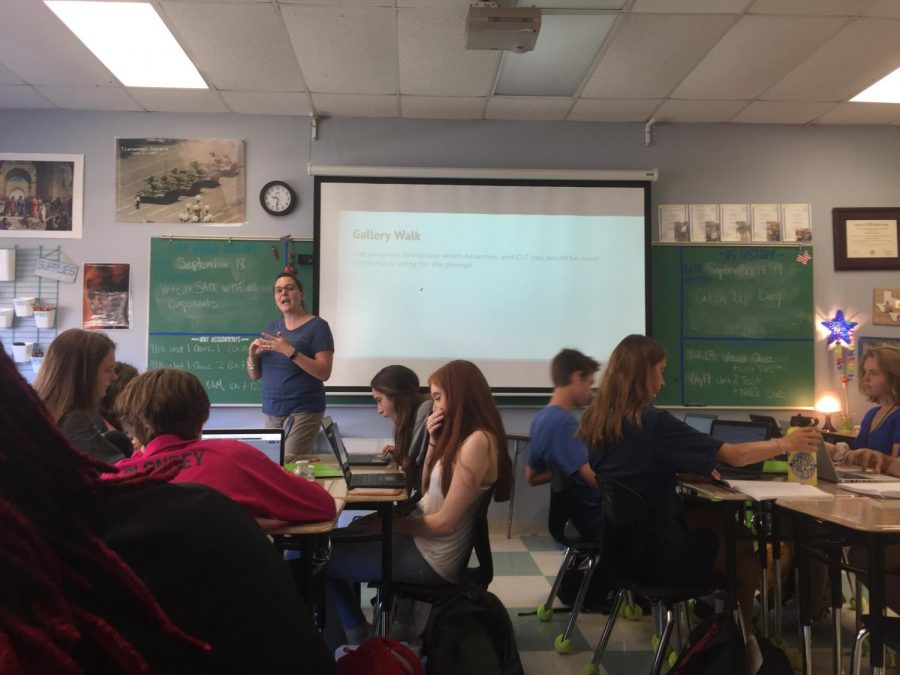 Uzzle teaches her class in a new school year after the Texas Legislature passed a bill that would raise salaries for teacher. Uzzle is pictured teaching her AP world history class.

Over the summer, the Texas Legislature passed a bill that would raise teacher salaries across the state. This raise also applied to various other school staff members, such as janitors, librarians, and counselors.

While the pay raises vary between the school districts, Austin ISD has decided that all AISD employees received a 6% pay raise, and teachers that have been working in AISD for more than 5 years received a 7% pay raise.

“I don’t know if it is possible to financially compensate teachers fairly,” Social Studies Teacher Wendy Uzzle said. “Teaching is demanding – emotionally, sometimes physically, and intellectually. It is difficult to put a monetary value on what teachers add to society. I am thankful for any additional pay raise that the state or district is willing to give me.”

“When teachers first heard about the raises last spring, we were cautiously optimistic,” Uzzle said. ”While everyone wants to make more money, we’re always concerned that we will be asked to work more days, longer hours, extra duty, or other responsibilities. I am also concerned about the rising cost of healthcare to offset the increased pay.”

As of now, payroll takes up 85% of the AISD budget (not including recapture costs). There has been an 18% increase in pay in 6 years, and around a third of that increase came from this new bill. Christopher Logan is an English and Rhetoric teacher coming into his seventh year teaching at Bowie, and his 14th year teaching for AISD.

”Most of us do this job because we love it. Our salary isn’t why we went into the profession in the first place,” Logan said.

Many faculty and staff find their salaries are not enough to create a comfortable income or find it harder to pay for any extra costs that may come up.

“My family had some unexpected expenses this summer -a new A/C unit-  that we need to pay off,” Uzzle said. “Additional money in my family budget means we can make more progress towards financial goals. Also, with two growing boys, a lot of money goes towards food.”

There have been many protests in Austin concerning the lack of pay for teachers, including a large rally in front of the Capitol in March of this year.

“Surveys consistently show that a majority of the population believes that teachers should be paid more,” Social Studies teacher Charles Stampley Said. “Obviously I am biased, but I also agree with that sentiment.”

Even though the pay raise is beneficial to teachers in many ways, it is not the main motivation for taking on the profession.

“Yes, we get the summers off, but we do a lot of work over the summer, and many teachers put in 10-12 hour days during the school year [and] work on the weekends,” World Geography teacher Matthew Parente said. “We do it because we love it, but getting paid definitely helps.”