Girls basketball welcomes team from down under 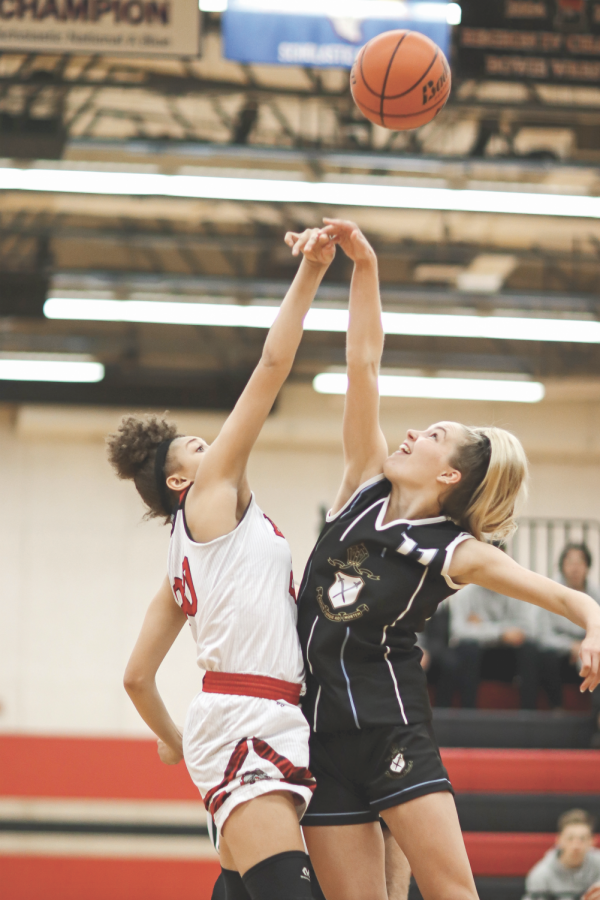 TIP OFF: Junior Chynell Mitchell tips the ball off against Ivanhoe Grammar sophomore Alana Mierisch. The Australian tour is on a 16 day tour of the United States.

Australian accents fill the hallways, for an Australian basketball team has come to Bowie to get a tour of the school, shadow select varsity players for a few days, and have a chance to take on some American high school teams on the court.

“Well [the Australians] do a tour every year for about 16 days, I think is the total tour, and they go to three different places in America,” girls basketball coach Vickie Benson said. “This year they’re in Austin, Dallas, they’re going to Phoenix, and then they’re going to California.”

The Australian players requested to be allowed in classes in previous years, and this year Bowie was finally able to make that happen.

“They’re going to classrooms with students and hanging out,” Benson said. “When they were here last year…they wanted to play, but they were so enthralled by the students that they just wanted to hang out and be with American students.”

Australian player, Alana Mierisch, has noticed the difference between basketball in the two countries.

“We have clubs outside of school that we all play for, so we’re all from different clubs and different levels and all that kind of stuff. This is actually the first time we’ve played as a team,” Mierisch said. “It’s more popular here and the atmosphere’s a lot better, I reckon.”

With just 16 days in the United States and so much to do, Mierisch and the rest of the team have a packed schedule to get through while also reflecting on such a unique experience.

“We’re here for the basketball tour, so we’re always playing, watching college games, and NBA games” Mierisch said. “Just the experience of playing the basketball over here is really fun, to be honest, and meeting you guys.”

The Bowie team has extended a warm bulldog welcome to their new visiting foreign friends.

“Last year we had an Australian team come and it was a fun game and it’s good, we have an off District game, so it’s just nice to have time to play them” senior Katelyn Dill said.

Even though these teams live on completely different sides of the world from each other, both teams have bonded over jokes, laughs, and getting to know one another.

“Last year they made jokes about how they all had kangaroos in their backyard and kind of made fun of us, but it was all in good fun and they’re really cool” Dill said.