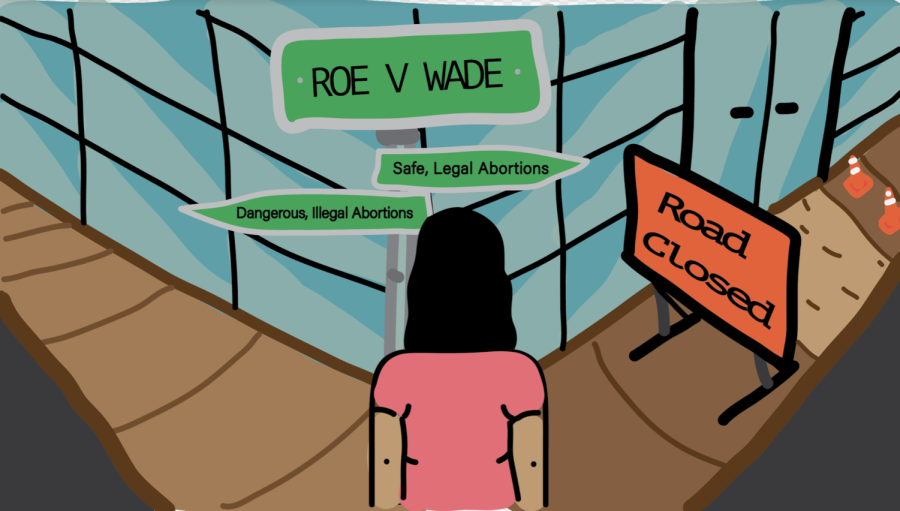 Leaked opinion draft of Roe V. Wade displays a frightful possibility for abortion restrictions
A woman walks up to a Planned Parenthood clinic, feeling nervous about having an abortion procedure even though she has weighed her options and decided that this is the best one for her. Before entering the building, she is bombarded by pro-life activists shouting various obscenities and threats at her.

Even though she’s uncomfortable at this moment, she is eternally grateful for her ability to have this choice to terminate the pregnancy, regardless of the push back she may receive from others.

On May 2, this right to choose was suddenly jeopardized when a Supreme Court majority opinion draft was leaked that could potentially overturn the 1973 Roe v. Wade case that ensures the right to medical privacy, including abortions with some restrictions in later-term pregnancies.

This leaked draft has caused uproar throughout the country, as women fear that their rights are being infringed upon by the Supreme Court. Protests and social media posts have been used to spread awareness on how detrimental the radical right decision to overturn this law would be.

We wholeheartedly disagree with the potential decision to overturn Roe v. Wade because it eliminates the right to bodily autonomy and a woman’s right to choose what she wants to do with her own body.

Although the Supreme Court aims to completely eliminate abortions with the overturning of this law, overturning Roe v. Wade will only get rid of access to safe abortions for the mother. According to an article in the National Library of Medicine, around 68,000 women die of unsafe abortions annually as of 2021, making it one of the leading causes of maternal mortality at 13%. With the overturning of this case, unsafe, botched procedures will be the only way for women who choose abortion to make the choice that is best for them, and they will sacrifice more to get them. Because of this, the mortality rate will inevitably rise. If the majority of the Supreme Court is truly pro-life, they should not want more mothers to be dying of these unsafe abortions.

Another issue we believe the pro-life agenda has is the empathy for the effects of what banning abortion would cause. Once these babies are born from mothers who may not be able to support them, they would have to be placed into the foster care system. Around 1,000,000 kids in the foster care system report abuse in their foster care homes, according to Rosenfeld Injury Lawyers. This issue is one of many that fails to be addressed by the Supreme Court, and one that will only get worse with the banning of abortions. In addition, the support for pregnant women that are financially unstable or addicts is virtually nonexistent in the government. Rather, they are shamed for their situations and forced to keep an unwanted child in a potentially dangerous environment.

The Dispatch Leadership Team ultimately disagrees with the leaked draft to overturn Roe v. Wade. We believe that women deserve bodily autonomy and the right to choose what they want their future to look like; the government should not be able to interfere with this decision because it should be between the woman and her doctors only.