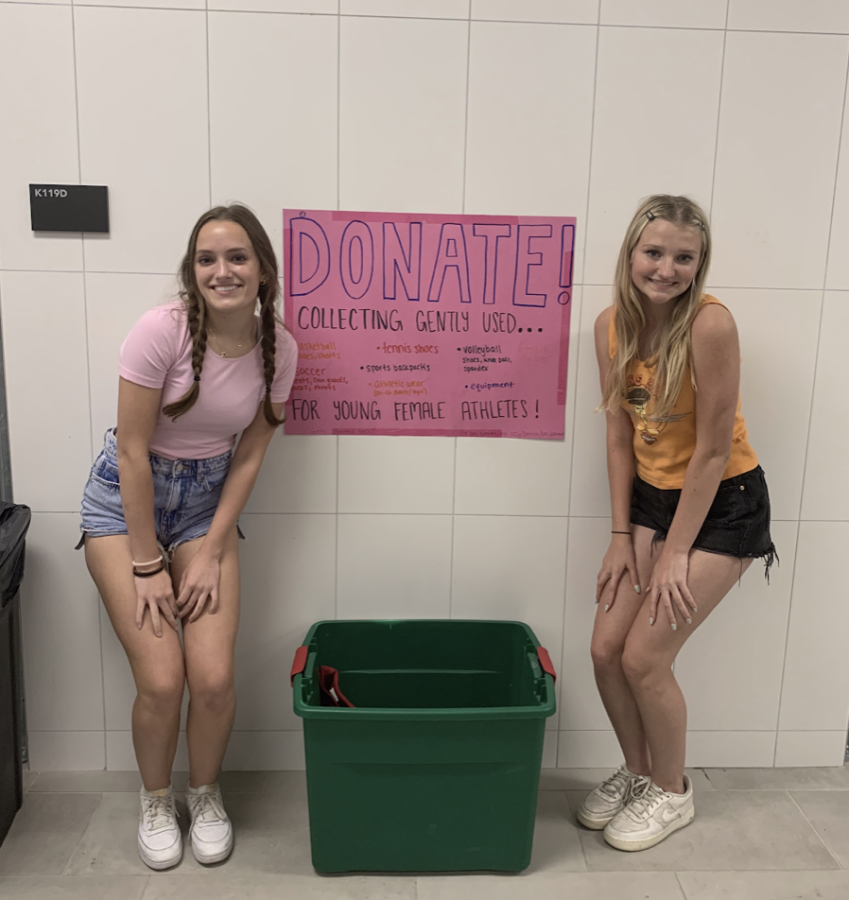 MAKING A CHANGE: Juniors Izzy Detrich and Wes Warmink stand by their donation bin for gently used sports equipment in the girls’ locker room. The pair of athletes distribute the equipment to aspiring female athletes around the city.

Athletes Izzy Detrich and Wes Warmink gather old sports equipment
Progression of sports’ rules and regulation over the years of longstanding fierce competition has inevitably generated more advanced, protective equipment that grant athletes the freedom to perform their craft to the best of their ability without concern of injury.

Junior soccer player Izzy Detrich experienced the privilege of sufficient equipment on the pitch, as she bolted along the sideline carrying the ball and dodging defenders. Closing in on the goal and her teammate’s shouted motivation echoing in her ears, Detrich raised her eyes, locking in on the desired target.

Winding up, Detrich readied to strike the ball but was stopped short by an opponent’s crushing tackle that left her on the turf grasping for her leg. The presence of an adequate shin guard was Detrich’s only defense from a near-broken leg.

Because of this moment, Detrich, with the help of her mom and junior teammate Wes Warmink, took action to improve the availability of proper equipment for less fortunate children with athletic aspirations. The two junior soccer players believed equipment should not be the barrier that halts an athlete’s dreams and thereby formed a donation of sports equipment to middle school and high school athletes across the city.

“Sports have been one of my passions for as long as I can remember,” Detrich said. “Throughout my middle school experience at Gorzycki, I had a lot of fun trying out new sports and playing against different schools. I was lucky enough to have all the right equipment needed to perform my best in these sports. However, that’s not the case for all schools. Whenever players don’t have the right resources, they are set at an automatic disadvantage, which creates an unfair playing field. This realization sparked our motivation to collect what we could to give girls a fair opportunity in trying new sports.”

Inspired to help others, Detrich and Warmink worked to broaden their activism hoping to aid in the indirect development of young female athletes in the greater Austin area. Following a period of establishment and spreading their message and ideas, Detrich is confident that the donation has made positive impacts on a variety of female athletes.

“It was a little hard to spread the word of our idea at first,” Detrich said. “And without the help of others, we wouldn’t be receiving much to donate. But, since then, our donation has spread to many of the female sports programs and even some service clubs here at Bowie. We recently expanded to gather gently used donations from Gorzycki Middle School as well.”

After the creation of their donation fund, Warmink began to fully comprehend the importance and privilege of proper equipment in sports. Detrich’s teammate and partner, Warmink describes the stimulus for founding their shared donation.

“We started our donation drive mostly because it was my friend’s mom’s idea but we had kind of been talking about the contrast in equipment between some middle schools since we were in middle school,” Warmink said. “I feel like I hadn’t really thought about how much harder it would be to play a sport without proper equipment like shoes, athletic clothes, etc. Now that it’s what we’re collecting those things it’s made me realize how important those things are to have to get better.”

Warmink continued the discussion of the basis and principles of the donations by mentioning her and Detrich’s primary goal of allowing younger athletes to experience a sport to its fullest as a result of ample equipment.

“We hope that the gently used equipment makes it easier to grow in the sport,” Warmink said. “It’s definitely put into perspective how lucky I am with all the equipment that is offered at Bowie and to me. Students shouldn’t have to make a choice to not compete or not be involved in a team just because of the lack of equipment availability, so we hope that the donations offer an opportunity for that.”

Detrich builds off of Warmink by specifying that they intend to gather a variety of sports equipment, not just equipment needed for soccer, the sport the two partners predominantly participate in. A donation box located in the girls’ locker room, Detrich wishes for young female athletes to pursue their dreams freely without restrictions such as faulty equipment.

“The purpose of creating our donation drive was to collect as much useful sports equipment from female athletes at Bowie to then donate to some middle school girls around Austin who may not have easy access to these materials (things like soccer cleats, shin guards, volleyball shoes, knee pads, track spikes, etc.),” Detrich said. “Through this we hope to allow young girls to chase their dreams without interruption.”

Detrich describes the difference between participating in volunteer work and personally forming a platform to help others. The junior furthers this by mentioning the feeling of fulfillment after improving the situation of aspiring student-athletes.

“I have participated in many kinds of community service, but have never started a donation drive,” Detrich said. “It has been an awesome experience so far seeing peers help donate and see our collection of equipment grow. We have made one delivery to a coach at Bertha Sadler Means all-girls middle school. And it was so nice for us to see young girls excited for a box full of athletic shoes.”

Having created a donation fund to promote the development of young athletes with similar interests to her, Detrich believes that the donation has not only had a positive effect on her peers but has been very impactful in her own growth.

“This donation really made me realize how lucky some of us should feel for having many of these beneficial resources handed to you,” Detrich said. “It has been an enjoyable experience for us seeing our teammates and friends support us by donating any unused or extra equipment. We will carry our donation into next year as the sports seasons begin again, and we hope to keep expanding so that we can donate to more middle schools.”