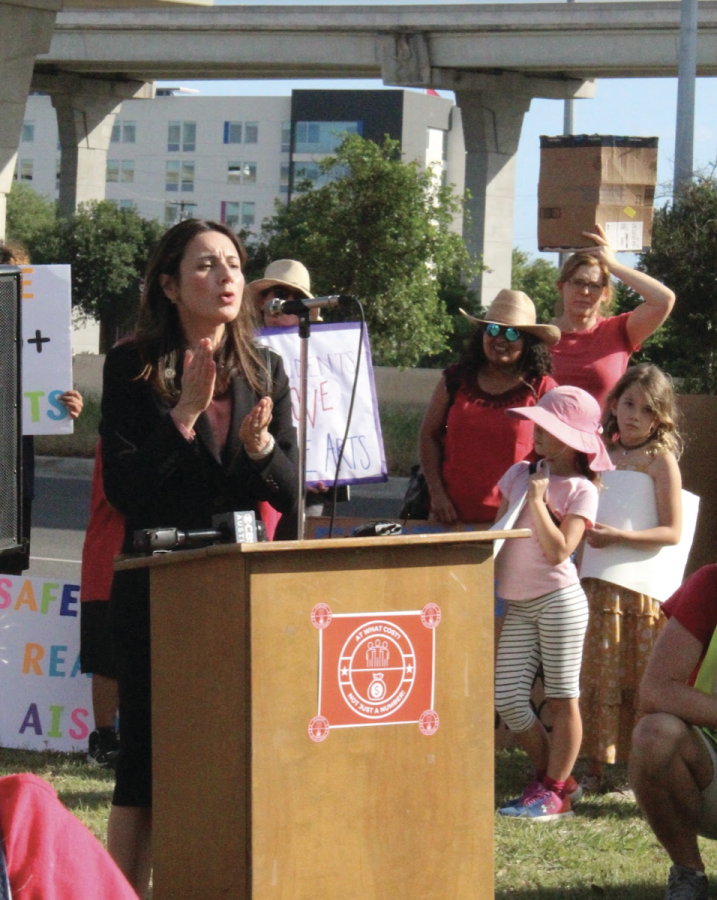 PASSIONATELY SPEAKING: A former AISD office member shows her support for Education Austin in a speech during the rally. The Education Austin Union has around 3,000 members, according to Texas AFT.

AISD staff members join at the districts headquarters to protest and demand better pay
A sea of red swarmed the Austin Independent School District (AISD) headquarters at IH35 and Hwy 71, chanting and protesting the District’s board meeting.

On April 28, AISD staff rallied together to demand better wages and improved working conditions at the monthly board meeting. Organized by Education Austin, attendees wore red to show unison and made posters with their demands displayed on them. Bowie English teacher Bree Rolfe is a part of the member organizing committee for Education Austin and interviewed people at the rally to learn why they attended.

“I did the graphics and I’m on the messaging committee. We worked as a committee to come up with the messaging and everything that we wanted, I also did the fliers and stuff for the rally,” Rolfe said. “We sat in the meeting, I didn’t speak but we supported our union members who were speaking.”

Education Austin’s “At What Cost?” campaign has five demands published to address the way the district is balancing the budget. They include a $6.50 per hour pay raise for all classified employees, keeping the six of eight schedule for all secondary, giving elementary teachers additional planning time they deserve, reinstate a substitute pay agreement at the elementary level, and to provide a $1,000 stipend to elementary teachers required to complete House Bill Three reading academies.

“We have classified staff in the district who are paid less than fast food workers, which is sick. And to keep the six out of eight schedule for all secondary teachers and we got that demand and that’s great,” Rolfe said. “So, in elementary schools, they have teachers covering for other teachers and they’re not getting paid for it, one of my union colleagues has been covering her co-teachers class for like a month, we just don’t have any subs.”

Principal Mark Robinson touched on the inspiration behind the “At What Cost?” campaign.

“The district did decide to schedule for next year teachers to teach six classes out of eight but that also meant that they would then need to offset those costs that they were potentially going to save in other ways,” Robinson said. “And so that generates a lot more conversation and I really think that’s where Education Austin came in, and got very involved in the conversation.”

Rolfe’s involvement in Education Austin is very important to her as she works to help her community and prioritize her students.

“All we want are the people at the top to get feedback and input from students and staff before they make decisions and I don’t know that that’s always been happening,” Rolfe said. “We would like to continue and open communication so that we can all work together.”

AISD Chief of Human Capital Leslie Stephens detailed the strategies the district is working on to help combat recapture.

“Our Board of Trustees is very active and is working with Raise Your Hand Texas to develop advocacy strategies,” Stephens said. “In addition, the district is making some specific requests of the legislature that are applicable to recapture, such as an early payment reduction- meaning if we pay our bill earlier than the deadline, we get a discount and we are also looking at advocating an increase in per pupil expenditures across the state.”

The student to teacher ratio greatly affects the quality of learning occurring in classrooms.

“The balancing of classes occurs with the development of master schedules.  Once all student choice sheets are in, they run documents called tallies, which show how many total students need what courses and then the courses are built in the system,” Stephens said.  “Once school starts, campuses should look at class loads and balance courses within the schedule.

Bowie specifically has chosen to keep each department staffed at a 29 to 1 ratio. This also means that classes with smaller sizes will be cut in order to correctly balance and absorb larger class sizes.

“And so what I have done with this principle through that process, and working with department chairs and administrators, is make sure that if that those decisions are being made by departments, so that there’s not a lower class size, for example, in CTE or fine arts, which translates to larger class sizes in English or social studies,” Robinson said.

Stephens explained the actions AISD has taken to balance the budget to accommodate for more controlled class sizes.

“The district has done a multitude of things to balance the budget, some of those include  eliminating central office positions, evaluating and eliminating vacant positions, reviewing contracts, consolidating services within departments, and in some cases eliminating specific departments or services,” Stephens said.

Robinson elaborated what the disadvantages that these changes have placed on administration at Bowie.

“I think the biggest thing there is that it has been a stress on administration in that we still have to get ready for next year,” Robinson said. “And so it’s just a lot of staffing to have to manage and prepare for next year and I would like nothing more than everybody to absolutely stay at but I know that that’s not realistic.”

District enrollment numbers for the 2022-2023 school year have decreased significantly than in previous years, resulting in a decreased budget.

“86% of the district budget is personnel, so if enrollment continues to decline, once again, the district will have to look at personnel costs and positions as well as other expenditures, such as contracts, of the new enrollment,” Stephens said. “With an increase in enrollment, that may indicate that we will need more teachers, dependent upon the school, grades, of the new enrollment.  In that case, the additional funds would go towards to increase in teacher positions.”

At Bowie, excellent faculty and students make both Robinson and Rolfe confident that Bowie is sure to overcome hardships brought on by district budget cuts which have been impacted by enrollment issues.

“I think that the Bowie parent community has been largely supportive of teachers like our family and I’m very proud to work here and that response has been great. My students and their parents have been great,” Rolfe said. “Everyone has been so supportive, and we’ve really band together to make what is kind of a bad situation to the best we can because that’s how Bowie functions.”