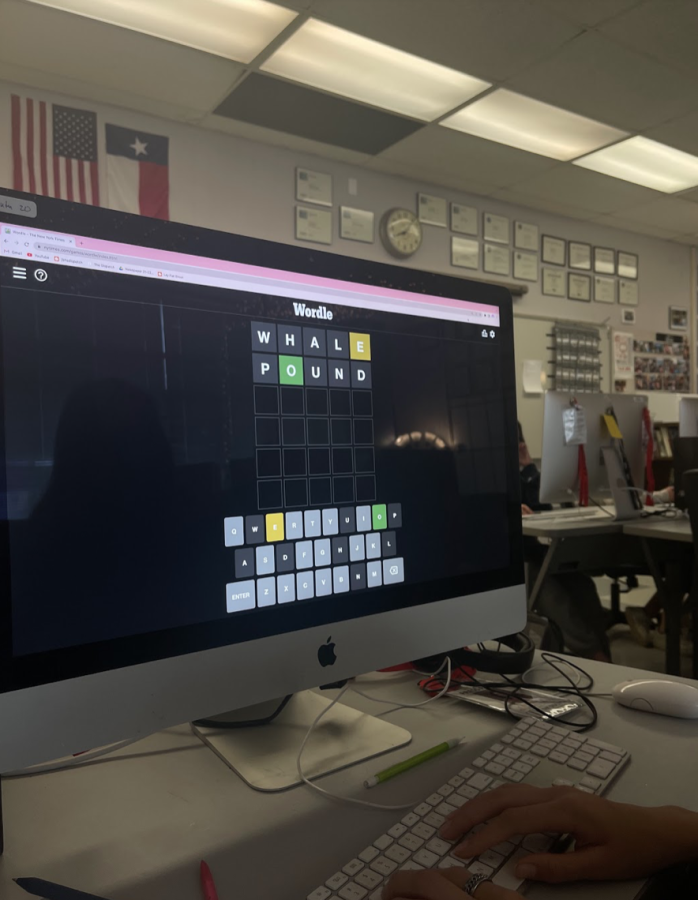 When you type in a word the game will highlight letters yellow that are in the word but wrong place, and green if the letter is in the right place.

The trending word game inspires spin-off editions to challenge players
In October 2021, Wordle was born. Wordle is an online word guessing game that has gained immense popularity since its release to the public. Wordle is a simple game, there are six blank sections for one five letter word.

When you type in a word the game will highlight letters yellow that are in the word but wrong place, and green if the letter is in the right place. Everyday there is a new word to guess, and spin-offs to play when you are waiting.

The new web-based game has captivated people across the globe and continues to offer people of all ages a fun pastime.

The original Wordle is still my favorite even among all of the spin-offs. My friend introduced the spelling game to me during class and at first I was skeptical. I have never been a good speller so the idea of the game was unappealing to me.

The first few times playing I would lose over and over again. I suddenly had a drive to win the game.

For the next month the highlight of my day was figuring out the new word of the day. It was like a fun-brain workout, and when I got the word on my second of third try I feel like my day is suddenly on the right track.

Wordle is a great way to start the day and it widens a person’s vocabulary. I really enjoy this game because it does not target a certain audience, it’s open to all.

Although most of the spin-off Wordle games are gratifying, Quordle is not.

Quordle has four Wordle boxes that all share the same keyboard. In simple terms, all of the boxes have different words and different letters but you have to use the same words to figure the separate words out.

Guessing four different words at the same time is already hard enough. There is so much going on in the game it is almost impossible to play. Users only get nine chances to guess the four words, creating a very difficult puzzle that seems impossible to solve. To add on to that, since all of the boxes share the same keyboard you can’t really concentrate on just one section at a time.

The most I have gotten in the month I have been playing is one word.

When playing Quordle I would recommend to focus on two sections at a time. Since the goal of the game is to guess four words, focusing on two at a time will enhance your chances of guessing the others. It also helps to reduce the amount of tries you guess the words in.

I feel like the game would be more enjoyable and less difficult if all of the words had the same letters. Sure a good challenge is fun once in a while, but when it’s near impossible to complete the task it’s not worth it.

Quordle is intensely challenging so if you’re looking for a relaxing start to your day I do not recommend it. Overall I would give Quordle a two out of five for these reasons.

Absurdle lives up to its name. The game is very similar to the original Wordle in which there is a five letter word up for guessing. However, Absurdle offers an unlimited amount of guesses.

When I first played Absurdle I got the word on my fourth guess. I thought that it wasn’t that much different to the original at all, until I gave it another go.

Absurdle really does make your brain think. I think that the game tries to use words that a person would not usually use in day to day conversation and that is why the game is more difficult.

The use of double letters is also common in the game. I think that this strategy is also very clever. I can’t name the number of times I have had a word like “fluffy” and lose my mind over it.

It’s good not to overthink the word. Absurdle will also include words that are really simple like “story,” and overthinking is what the game wants you to do.

Absurdle is also fun to play against with friends. Sometimes my friends and I will have small competitions to see who can get their word first. Since both words are equally as absurd it is a fair game and really amusing when you win.

Absurdle also has an option to “give up,” so there is no win and lose. I think this option is very considerate to the player and makes the game more enjoyable. Unlike other Wordle spin offs, Absurdle has unlimited guesses and the “give up” button makes the game less stressful. Overall, I think that Absurdle is a great game to play when I don’t really have the intention of winning and is definitely in my top three favorite Wordle spin offs.

Absurdle is challenging but not to an extent that it frustrates the player. I believe this one deserves four out of five.

Globle is like a big test to your geographical knowledge.

The design of this spin-off is really cool. To play the game you start by clicking the 3D globe on the center of the screen.

Each time you type a country in the game colors the countries warmer and warmer colors until a country is red. Red means that you hit the desired country.

My geography skills are a bit rusty but playing this game has been a lot of fun. There are unlimited guesses and Google is a big help. Personally I have learned a bunch of new countries through this than I can remember learning about in class.

However, the game is tricky at times. If you are a weak speller then I don’t think this game is exactly for you. All Wordle games do require exact spelling, but since Wordle contains countries you are not spelling out simple five letter words. Some countries have more than one word and others have complicated spellings.

Whenever I play Globle I always have a map open in another tab, which is technically cheating. However, this is super helpful for people whose strong suit is not geography.

Globle has made geography somewhat enjoyable  and introduces different parts of the world through the game. I think this game is a great pastime because it is not on a timer like many other Wordle spin-offs and teaches you more about geography without you knowing.

Globle’s design is definitely my favorite out of all the Wordle spin-offs. I would rate this a three out of five.

Weddle is named after former American football safety, Eric Weddle. In this new version of Wordle the motive is to guess NFL players.

This new version of Wordle was just recently released to the public and is super interesting. The game’s page design is very different from any other Wordle game. There is a selection tool in the center of the screen. When you click on it there are NFL players’ names and their information. When you select the name it provides the players team, division, height, age, and number. When a player you have selected has something similar to the chosen player that aspect is turned green. There are eight chances for you to guess the right NFL player.

I know little to nothing about NFL players’ heights and information like that, so playing this game was hard for me. The game’s instructions were very vague, so I was just clicking random names until my chances ran out.

Nonetheless, Weddle is really engaging because of all the information about the players. You really have to know your NFL players and memorize little details about their outward appearance in order to play. The game also renews a player every three hours which is a lot faster than other Wordle games.

I think that Weddle is perfect for people who are really interested in all NFL players. Weddle has crossed a border compared to other spin-offs, as it requires an abundance of other information, which makes it a great addition to the Wordle family. I’d rate this game a four out of five.