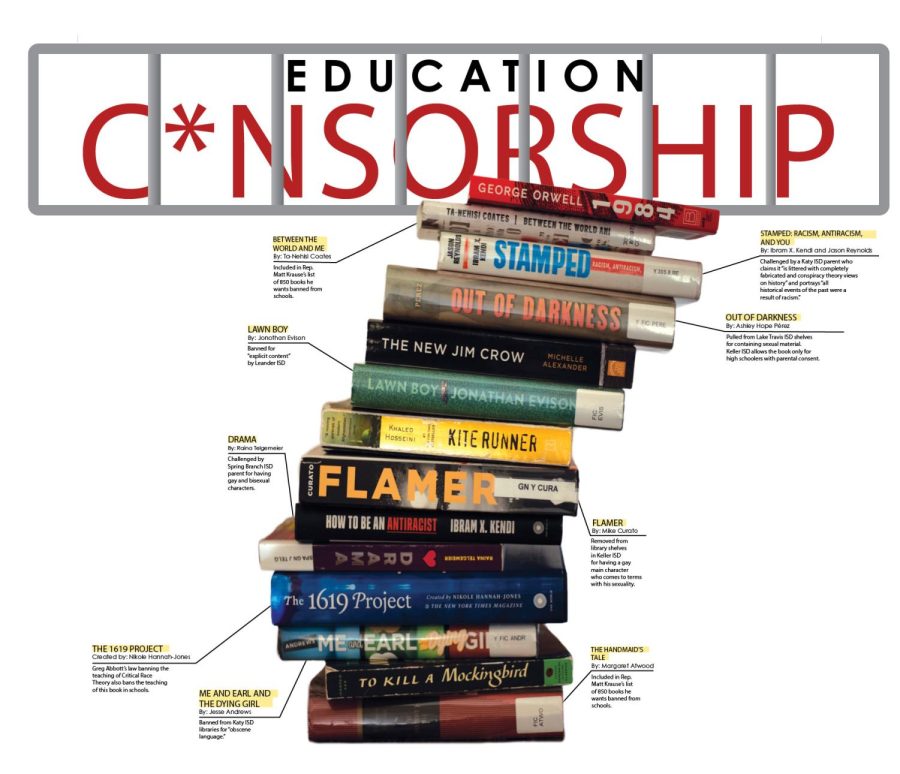 The most hotly contested books are targeted by parents and conservative politicians.

Librarian Tara Walker-Leon is ready if she needs to be.

Armed with Austin Independent School District’s (AISD’s) challenged book policy, she prepares herself to defend against any possible objections to the books she has in Bowie’s library.

“It’s a targeted attack on libraries and schools,” Walker-Leon said.

Her preparation comes after waves of backlash from parents and community members across America regarding the reading materials that are being provided in schools. Texas is no exception to this backlash. From Katy to Leander to Granbury, schools all around Texas have had their books contested or pulled off of library shelves due to having what parents deem as “inappropriate content.”

“I think it’s the same story over and over, to where one group of people doesn’t think another group of people should read the books they disagree with,” Walker-Leon said. “That’s censorship. Just because they don’t agree with it doesn’t mean it should be taken out of the library. It’s not being taught in English classes, so they don’t get to do that.”

The most hotly contested books are targeted by parents and conservative politicians. In October 2021, Texas Rep. Matt Krause compiled a list of 850 books he deemed “might make students feel discomfort, guilt, anguish, or any other form of psychological distress because of their race or sex.” Krause then called on Texas school districts to report if they have any of these books on their shelves. All the books included in Krause’s list cover themes including the LGBTQ+ experience, racism, sex, and violence.

“I think the subject matters being targeted are the ones that should be read the most,” junior Ben Locke said. “If we ignore the problems we have as a society, like racism and violence, instead of talking about them the problem will never be fixed because there is no room for change.”

AISD decided not to respond to Krause’s request, opting to not provide information on whether they had these contested books or not. In a similar request, in November, Texas Governor Greg Abbott wrote a letter attempting to convince the Commissioner of the Texas Education Agency, Mike Morath, to investigate public schools for “pornographic books and content in Texas public schools.” And in early February this year, Texas Sen. Ted Cruz stated that “left-wing educators” are “putting explicit pornography in front of kids.”

“We should be able to learn about all subjects, whether the government thinks they are appropriate or not,” senior Sadie McDonald said. “Children should have access to books about racism, sexuality, violence, and sex because we deserve to be educated on these topics to help ourselves and create our identities, as well as to stay informed about the world. All children deserve to be represented in school libraries.“

Most recently within the past four months, Leander ISD, Katy ISD, North East ISD, Granbury ISD, and many others in Texas have had some sort of reading material removed from their schools. Other districts, like Round Rock ISD and Fredericksburg ISD, have ongoing attempts to ban books, but nothing successful yet. One of these commonly challenged books, “Out of Darkness,” was targeted for its sexually explicit content and themes of racism.

“I read [‘Out of Darkness’] at the beginning of the year,” Walker-Leon said. “Everyone in Lake Travis ISD was kind of freaking out about that book, and then made national news. I was like, ‘What?’ So I read it. I don’t understand why it was even challenged. It was about an African-American man dating a Mexican-American girl. I don’t understand why it was challenged.”

“Out of Darkness” author Ashley Hope Pérez describes the whole situation as her “nightmare.” After her book got into news cycles across the country, Pérez received massive amounts of online threats and harassment.

“Rather than focus on what their kids are actually reading, these parents often take their lead from social media pages and conservative organizations that list which books to target and provide talking points, as well as screenshots of school library catalogs,” Pérez wrote in a commentary for Texas Monthly. “Parents’ outrage may be genuine, but their actions create an even more hostile environment for already marginalized kids.”

While conservative efforts to ban books have had some success, there is plenty of push-back against these decisions. Walker-Leon has participated in the #FReadom Fighters movement on social media, which aims to speak out on censorship. In other parts of Texas, students and community members are speaking up as well. In Katy, students distributed challenged books to their student body.

“As students, we must take ownership of our education and not let others decide for us which resources we can access and which topics we can learn about,” Katy ISD senior at Seven Lakes High School Cameron Samuels said in an interview with the Texas Tribune.

Censorship efforts in American schools aren’t new. Besides the removal of books, curriculum censorship has been a contentious topic in schools as well. Ever since the debate surrounding the teaching evolution in public schools with the Scopes Trial in 1925, there have been numerous disputes concerning what teachers are allowed to teach. More recently, the concept of teaching Critical Race Theory (CRT) has been brought up in both state and national policy.

“I’m a former social studies teacher, I have never heard of anyone teaching Critical Race Theory,” Walker-Leon said. “All of a sudden, everyone believes that just because some news station said it. So that was like a launching pad to go into further attacks. From there, they launched into attacking libraries, schools, and showing up at school board meetings.”

CRT is a concept that treats race as a social construct. It asserts that racism is systemic and that American institutions uphold unjust hierarchies between white and non-white populations. Recently, many conservative politicians have claimed that schools are teaching CRT to their students. Sen. Ted Cruz stated in an interview with Fox News that CRT is “all poison and it’s being poured into the minds of our kids.”

“I really don’t believe schools teach Critical Race Theory, and the only ones ever bringing up the subject are lawmakers that are more focused on re-election than what kids are learning,” Locke said.

Conservative politicians’ opinions regarding CRT have been shown to reflect their target voter base. The Pew Research Center found that 49% of politically left-leaning respondents say “increased public attention to the history of slavery and racism in America” is “very good” for society. This number was only 8% for politically right-leaning respondents.

“I continue as I have, which is, if I teach history, there are things in history that are uncomfortable that we have to address,” ethnic studies and history teacher Carlen Floyd said. “If I teach ethnic studies and we’re talking about oppressed populations throughout U.S. history and today, I am going to have the conversations that are required to actually consider those things. Other than making my students aware of what the conversations are at the state and national level, we continue to have conversations that are relevant to our studies.”

In June of last year, Governor Greg Abbot signed House Bill 3979, which states schools can’t teach that involves “race or sex stereotyping.” This law bans schools from discussing controversial topics surrounding race, and targets books like the 1619 Project, a collection of essays that analyzes the way slavery impacts the U.S. today. Besides just teachers, many students have reported that censorship negatively impacts their education as well.

“Censorship affects my role as a student because when items are censored, I am unable to gain a well-rounded perspective of a subject, which makes me feel ignorant and uneducated,” McDonald said.

Other, more recent bills aim to censor education as well. In Florida, Gov. Ron DeSantis signed the “Don’t Say Gay” bill into law. This measure bans teachers discussing LGBTQ+ issues to their students through the third grade. Since then, many other states have tried to introduce their own version of the law, with Texas Lt. Gov. Dan Patrick claiming he is attempting to create legislation similar to Florida’s.

“I don’t think teachers should be worrying about what they can and cannot teach,” Walker-Leon said. “I’ve been with the district for 17 years and I have seen maybe only a handful of people make inappropriate decisions. I think it kind of goes back to trust trusting teachers and educators to make good decisions. Right now, they’re not being trusted very much.”

While signing the “Don’t Say Gay Bill,” DeSantis stated that “we will make sure that parents can send their kids to school to get an education, not an indoctrination.” Many conservative opponents of LGBTQ+ and CRT education claim that exposure to these concepts as children will indoctrinate them to hold similar values when they’re older.

“Some folks think that this is about trying to make people believe things,” Floyd said. “Exposure to ideas is not the same thing as making someone believe something or indoctrination. It is the free flow of ideas, understanding, and consideration of the world.”

There have been many local efforts to protect an uncensored education. AISD continued to celebrate Pride Week in all schools in late March. Superintendent Stephanie Elizalde claims CRT is not being taught in AISD schools. On a national level Floyd argues there are things everyone, especially young people, can do to make change as well.

“I think if there’s anything to take away from all of the happenings is that if you feel strongly either way, regardless of your position, elections matter,” Floyd said. “Voting matters. We know, historically, that young voters 18 to 25 had the lowest voter turnout. So when I hear my students complain about things, I go, ‘Okay, so you’re gonna vote.’ Whoever votes the most will see the most policy responses.”