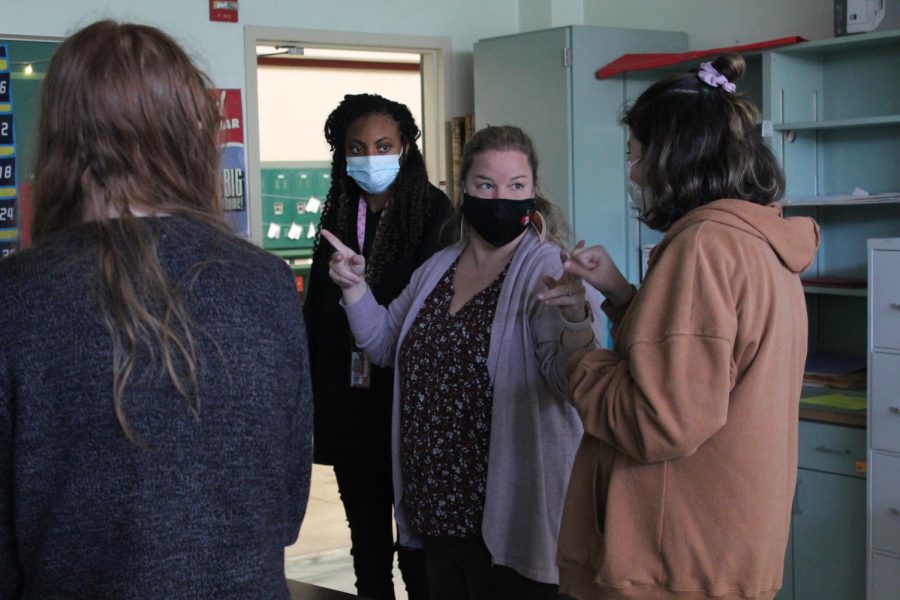 The ASL club was created by Ms. Hepburn, to give a chance for students that aren't in the ASL course to learn more about ASL and the ASL culture.

The ASL club was created by Ms. Hepburn, to give a chance for students that aren’t in the ASL course to learn more about ASL and the ASL culture. The club holds a meeting every Monday from 4:40 to 5:30.

Hepburn is one of ASL teachers at Bowie High School and is also deaf. She said wants to teach students more about the ASL culture. She created the club and runs all the meetings every week in her classroom after school.

“I wanted to start this club to promote ASL and its culture in a social setting and have people who may not be in the ASL program have an opportunity to learn about ASL and have fun with it,” Hepburn said.

“I wanted to give access to signers of all levels knowing zero sign to fluently signing. I want people to have a place to enjoy ASL outside of an educational classroom and see where they can take their ASL to the next level,” Hepburn said.

Six to seven students go to the meetings. At the meetings Hepburn leads games and activities to help the club members learn more about ASL.

“Usually we just play games relating to sign or sometimes we will do charades and poison dart frogs, or Pictionary with signs where you act out and sign instead of drawing pictures,” senior Kristin McPhail said.

“We talk about deaf culture and how sign language isn’t just a language, it’s a culture. And how there is a difference between understanding and knowing the language and actually speaking it,” McPhail said.

With the club starting up not too long ago, Hepburn has high expectations and is looking forward to what the future holds with the club.

“I was expecting at least 10-15 students to have expressed interest, but with the club just getting on its feet… the number of students is not that many. I’m hoping though with the newly established ASL club the numbers will get better with the investment of the students’ time and energy,” Hepburn said.