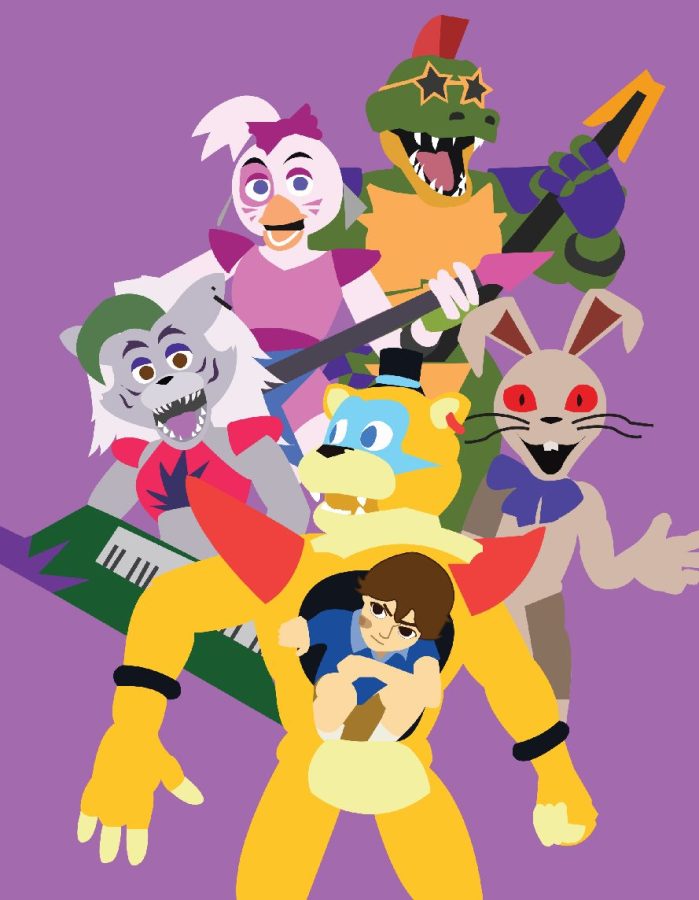 As someone who kind of grew up playing Five Nights at Freddy’s games, I can really appreciate Security Breach. I like the fact that you can choose what to do and there’s more freedom with it.

In 2014, game developer Scott Cawthon released a game that would quickly sweep the internet. Five Nights at Freddy’s was a game that appealed to audiences not only because of its horror element but because there was a deeper story to it. In the game, you played a recently hired security guard at a fictional pizza place called Freddy Fazbear’s Pizzeria where the animatronic singers would come to life and attack you at night. You would have to survive 6 nights like this, each one more difficult and complex than the last.

After the success of the first game, four more Five Nights at Freddy’s games would be released within 2 years of the original. Side games were made for the next couple years after that, these games mostly just added to the background and story behind the game.

But then, on December 16, 2021 Five Nights at Freddy’s: Security Breach came out. This game is not like any of the other FNAF games. Instead of playing a security guard, you play a little boy named Gregory, who gets himself trapped in the Pizza Plex after hours. In this game, you try to survive the animatronics with the help of Freddy, one of the only good animatronics in the complex. Another thing different about this game is that in the original games you were confined to a single room, but in Security Breach you can roam around the complex and make your own decisions. This leads to the opportunity for multiple different endings to the game.

In addition to game mechanics, some of the characters are different as well. One of the original characters that was a favorite of the first game, Bonnie, doesn’t appear at all except for in pictures. The game introduces new animatronic characters like Roxie, Sun and Moon, and Monty. It also introduces Vanessa, the current security guard of the complex, and Vanny, the main mystery and antagonist.

In the bad ending you simply exit out the front doors after Freddy tells you never to come back and you will never be safe. In this ending it is later shown that Gregory is sleeping in a cardboard box as Vanny’s shadow looms over him.

In the good ending you have to get a level seven security badge and upgrade Freddy fully, then you drive off in a van with Freddy and presumably never come back. This ending has an epilogue that shows a different animatronic replacing Freddy at the Pizza Plex.

To unlock the unmasked ending you unlock the exit near a prize counter, but not before Freddy sets everything on fire. Gregory and Freddy then run onto the roof where they meet Vanny and eventually unmask her. Vanny is a woman that resembles the security guard, Vanessa, but it is later shown that Vanny is not Vanessa.

The disassembled ending is an ending in which you find Vanny’s hideout and before you leave Vanny instructs robots to disassemble Freddy. In a rather gruesome turn of events, Gregory then hits a button to instruct those same robots to disassemble Vanny. But as previously learned in a different ending, Vanny is human. In the epilogue of this ending, a newspaper is shown to indicate that the Pizza Plex closed down but would be opening again next season.

The canon ending is the most difficult to achieve. In this ending, you must upgrade Freddy fully and find an elevator that leads to the wreckage of an old, burned down Freddy’s pizzeria. Presumably this is the same pizzeria that burned down at the end of FNAF 3. While in this Pizzeria you must defeat the animatronics that inhabit it and then escape.

The last main ending you can get in Security Breach is called the hero ending or the savior ending. In this ending you must complete all 3 of the side quests in the game called the Princess Quests. There is one quest in the Glamrock Beauty Salon, the second is in the basement of DJ Music Man, and the last is in Vanny’s lair. In this ending Freddy is dismantled and the security bots in the complex are deactivated. In the epilogue for this ending it shows Vanessa, Gregory, and Freddy’s head sitting on a hill eating ice cream.

As someone who kind of grew up playing Five Nights at Freddy’s games, I can really appreciate Security Breach. I like the fact that you can choose what to do and there’s more freedom with it. Even if you know nothing about FNAF I think that you might find this game enjoyable. There’s an engaging story line that you can play multiple times and get a different result. It’s a fun horror game without being gory and bloody and it’s a pretty well thought out and developed game.