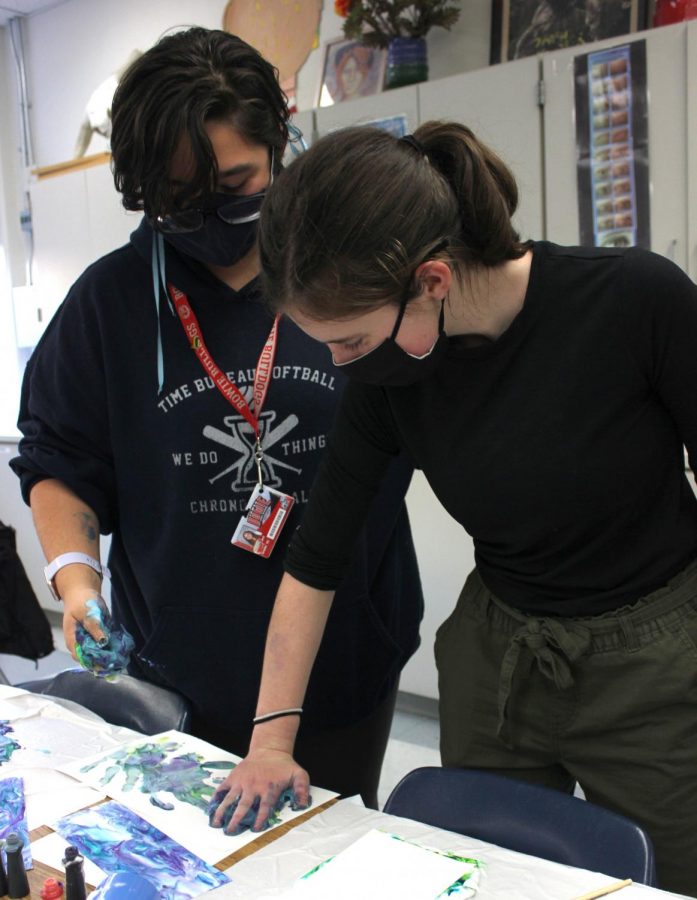 Despite the name, in design club it’s not required that you are traditionally designing something.

You’ve been waiting all day for this. And all of a sudden there it is, the bell. As soon as it rings you run out the door and down the halls. You have somewhere to be, something you’ve waited all day for: design club.

Design club takes place typically after school every Monday. It is an open medium place to make art while being assisted by prompts. Despite the name, in design club it’s not required that you are traditionally designing something. You can just sit back and draw, as long as you are doing something creative.

“What I’ve been doing is having a little slideshow just because we have had some people come in that are new and what not,” said Bowie student Kat Harper. “So I’ll put up the remind code then I’ll give a prompt for the day. If they want to do it, great, if they don’t, they can do whatever they want. And then you kind of have the rest of the day to work on that or whatever art thing you want. And it doesn’t necessarily have to be pen and paper, it can be anything. I know that one of my friends has been crocheting so that’s what she’s going to be doing at the next meeting.”

Kat Harper is the student that started the design club and has been wanting to make a club since last year. Unfortunately, last year you couldn’t make in person clubs because of virtual learning. So, this year Harper saw her opportunity.

“A lot of teachers were already doing stuff outside of school,” Harper said. “Like my art teacher Ms. DuBois coaches the swim team and Ms. Le Juene runs art club. And so I asked if they knew anyone else that could sponsor the club and Ms. Le Juene recommended Ms. Hereca as a sponsor so I met with her and we got it started.”

“[Kat] asked me if I could sponsor,” Hereca said. “And I kind of let her know my availability and it worked with hers. And then she had to fill out a form to submit to Mr. Robin’s administrative assistant. Mr. Robinson approved it, then Kat made posters, kind of came up with a plan, made a Remind group, and invited people to the group.”

In design club you don’t have to share your work with the club if you don’t want to. You can go to have a quiet place to work on art around your peers or to have a prompt to draw from. You also don’t have to have a specific skill level, especially since you can do whatever art related thing you would like.

“I don’t think you have to be a master artist or know exactly what you’re doing.” Harper said. “I know another reason I did start it and another reason there are prompts is because I have a hard time figuring out what to draw. A lot of times I stare at a blank piece of paper like ‘oh, I have no idea what I’m doing’. I wanted to just create a space for people like that, so I don’t think you have to be really good or not the best. You can just be wherever you’d like and I feel like it would help to get some kind of calm and direction. And sometimes something you make from that prompt could inspire something you make later on.”