A walk down memory lane 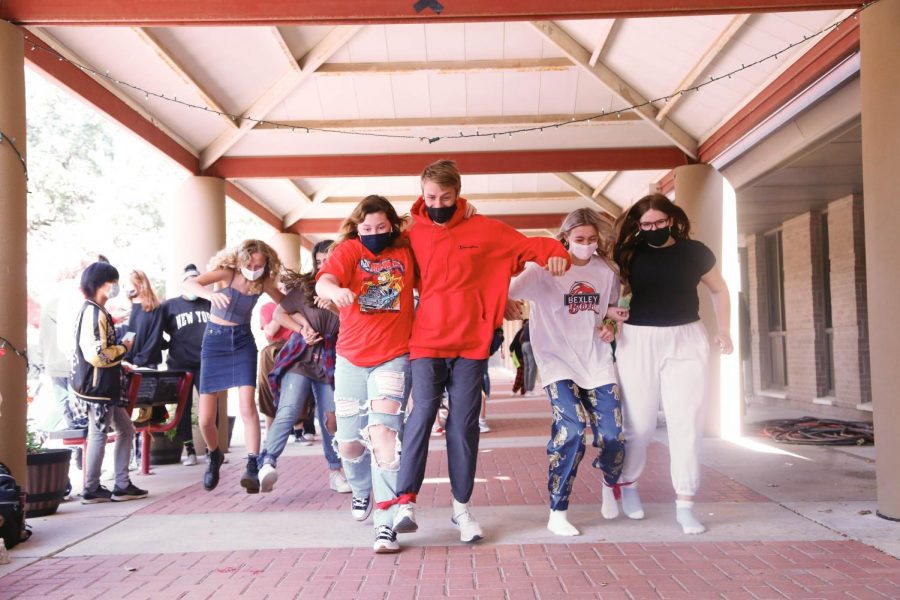 THREE, TWO, ONE, GO: Marley Anthony and Will Louis hold the lead in their three-legged race against Katherine Crosley and Ella Maedgen. Student council hosted the game, and incorporated the winter theme of the event into the three-legged race by tying the participant's legs together with Christmas ribbon. "My favorite part of the event was getting to sit back and see people actually participating and genuinely having some fun," project manager Ava Webber said. "It's really difficult to come up with something that will engage high schoolers in general so getting to see so many people playing the games and enjoying themselves was really rewarding."

Student Leadership hosts a nostalgic winter event
Walking around a circle of chairs with their hearts racing, rushing to grab a seat when the Christmas music stops, high schoolers are brought back to the memories they once made as kids. Games like musical chairs that bring back feelings of childhood bliss and naiveness were attempted to be recreated at Way Back Winter.

Way Back Winter was an event organized by Student Leadership in conjunction with the No Place for Hate initiative. The purpose of the festival is to host activities for students to promote inclusiveness and kindness through nostalgic childhood games that were enjoyed in elementary school.

“We were inspired by the fall festival that had been held during my freshman year and had decided it would be fun to host something similar,” senior Ava Webber said. “We also wanted to create an event that would bring people together after Covid-19 and would create a sense of community again. The idea behind the “way back” part of way back winter was that we could help students feel like kids again, so we came upon providing fun games and a pajama day to bring students back those days in elementary school where we would have fun holiday gatherings.”

All grades were invited to participate in the event with each grade being dismissed at the end of different periods.

“It was nice to see the kids outside and having fun since I know a lot of my students feel overworked and overwhelmed, so some enforced fun is what they needed,” English teacher Kimberly Wiedmeyer said.

“It’s important to host such events to remind students that no matter what, we are all humans and everyone deserves to be included,” Noack said.