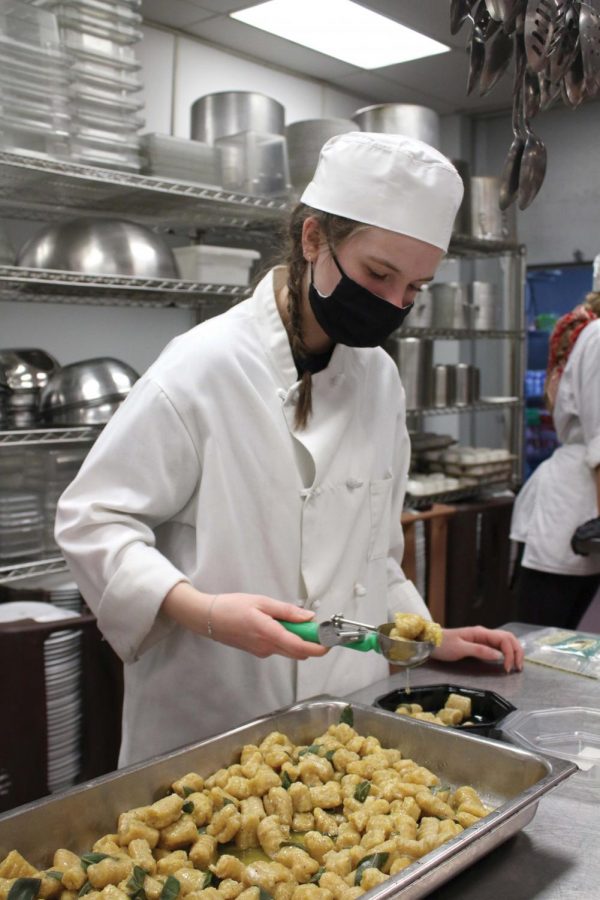 PACKAGING: Sous Chef Noelle Bruinings prepares the sample plate for the pumpkin gnocchi. Gnocchi is usually made with potato but was substituted with pumpkin to correlate with the pumpkin theme of the event. “I was blown away by the amount of work my students were able to get done during our first pop up,” Chef Bugni said. “I mean, we made homemade pumpkin gnocchi.”

Culinary students rush around the kitchen hurriedly constructing over 150 meals in preparation for their first event of the year. The culinary class returned to the kitchen to deliver their first pop-up of the year called “Pumpkin Lane,” created by Noelle Bruinings. Bruinings has been interested in cooking since a young age but has recently been putting her skills to the test.

“I took Mrs. Langdon’s nutrition class during sophomore year of high school and I always had a blast when we would go into the kitchen and cook,” Bruinings said. “And so when it came time to sign up for classes for junior year I thought it would be cool to join culinary so that I could continue cooking new things in school.”

Bruinings is now a second year culinary student, which gave her the opportunity to create her own concept for a pop-up restaurant that offered a variety of dishes that all had a common theme or concept. The theme for this event was pumpkin.

“I found the pumpkin fritters in the Sardinia Italy section of the Blue Zones cook book I was looking in and so that narrowed down my choices of meals to Italian,” Bruinings said. “Then Chef Bugni was talking to us and telling us we could have different themes for our pop-ups and I thought that a pumpkin theme would work perfectly since I really wanted to keep the fritters.”

While every advanced culinary student gets to host their own pop-up, Bruinings was the first to design a full menu to be served for delivery only since the COVID pandemic has closed the dining room.

“When it came to deciding who went first, the second years decided amongst themselves,” Chef Kathryn Bugni said. “Noelle really stepped up and offered to go first which was incredibly brave since the commercial kitchen has not been in operation for about a year and a half due to COVID. Noelle’s menu had lots of Fall ingredients, like pumpkin and acorn squash, so it also made logistical sense for her pop-up restaurant to be in October.”

As the sous chef, Bruinings had the responsibility of creating the menu, leading the cooking and delivering process, and more.

“The biggest challenge is that we have to rewrite each recipe we find so that it works with our kitchen at school,” Bruinings said. “What helped me the most was testing each recipe at home. I would check for flavor, test plating ideas, and would get an overall feel for how each dish would need to be prepared.”

Bruinings thinks the event was a huge success for the first event of the year and is now looking forward to future events that culinary is hosting.

“I am most excited to make wedding cakes and for our Thanksgiving potluck,” Bruinings said. “I’ve never made a wedding cake before and I’ve never really spent a lot of time decorating the cakes I make at home, so I’m really excited to get to do that. It’ll definitely be a challenge but I’m ready for it.”