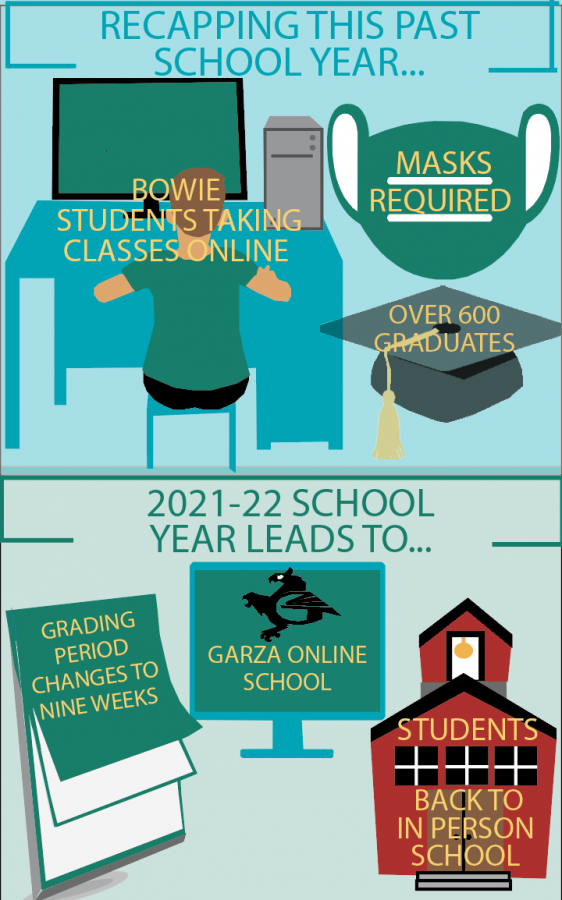 As the 2020-21 school year comes to a close, seniors excitedly move on to their future plans and the rest of students and staff members reflect on this unprecedented year. While this past school year progressed and COVID-19 cases rose, some students were in-person and others participated in an online school, never attending classes on campus.

With the number of COVID-19 cases decreasing in the United States, many students are hopeful to return to some sort of ‘normalcy’ as summer and the next school year approaches.

“I feel school hasn’t been the same through the pandemic and being online,” junior Brodi Tokar said. “I miss the social aspect of everything, regarding talking with classmates, teachers, and learning in person.”

As of Nov. 2020, Bowie has been following Phase Three of the Austin Independent School District (AISD) Reopening plan which requires health screenings, masks, and some remote asynchronous days. Junior Aine Flaherty had been online for most of the year and recently went back in person.

“In person, I found it so exciting to meet my teachers and watch them try to guess who I was with excitement,” Flaherty said. “When I go on campus to learn, I feel like I can connect with my teachers on a different level and it was a really positive experience.”

As of late April, around 31 percent of AISD students attended in-person classes, while the other 69 percent spent the school year attending online classes through Zoom.

“This past year has been easier in terms of schooling for me because being online has given me more time to complete assignments and teachers have made it easier for us in terms of tests and quizzes,” sophomore Sophie Chasen said.

Principal Mark Robinson is already preparing for the next school year. He anticipates that there will be an offering for both in-person and online learning, but not like it was this school year.

“I believe that students enrolled at Bowie will attend classes on campus similar to school before the pandemic,” Robinson said. “The need for remote learning will be met through virtual school at Garza online as it has been in the past.”

Another major change coming next school year for students and staff members, along with the return to full-time campus learning for students, is a new grading system. Next year, the district will align all levels to nine-week grading cycles.

“A nine weeks term of consistent grading and feedback allows for more grades to be taken to determine an average,” Robinson said. “More grades, as long as one is not a zero, give students more opportunity to get the grade they want in a course and make it less likely that a single grade will cause a significant fluctuation.”

While the change to nine-week grading periods does not mean students will have more or less work, past experience with short grading periods has made some students question the impact of these changes on grades.

“I think that we are better off having six six-week periods than four nine-week periods because I think it’s easier to manage assignments in smaller increments,” freshman William Gum said. “If there are too many assignments in a grading period it can be hard to keep track and get caught up.”

Currently, final exams are weighted 25 percent of the semester’s final grade. Next year, that weight has not yet been determined. If it stayed consistent with current weights, exams could be worth as much as 33 percent in the future.

“With the weight of finals, I feel that it puts a lot of pressure on students and negatively affects their mental health,” Flaherty said. “A higher weight can cause many students to have high levels of stress, leading to poor performance on the exam.”

According to University Interscholastic League (UIL), in order for a student to participate in UIL events, including sports games, they must be passing with an average of 70 at the end of the grading period.

“The nine weeks grading period will help athletes maintain their grades and eligibility,” Flaherty said. “With UIL rules, you have to be passing each six weeks to play, and with more grades to average out, it will help many athletes continue to participate in sports.”

Despite the change in weight for finals and adjustment to the grading system, English teacher Gabrielle Costello is ready  for the implementation of the new grading period.

“I personally am excited for the nine weeks grading period because I’m hoping  that my future  students will be able to utilize the system to their advantage as the nine weeks means more grades in the grade book and more potential opportunities for redeeming their grades when they need it.”

Although there are several unknowns about next year, Tokar looks forward to his upcoming senior year in a positive light.

“Next year will be an interesting transition in terms of coming back to school and adjusting to the nine weeks system,” Tokar said. “Whether it be socially or just having in person lectures, I can’t wait to retain it all.”