Impeachment is the bare minimum 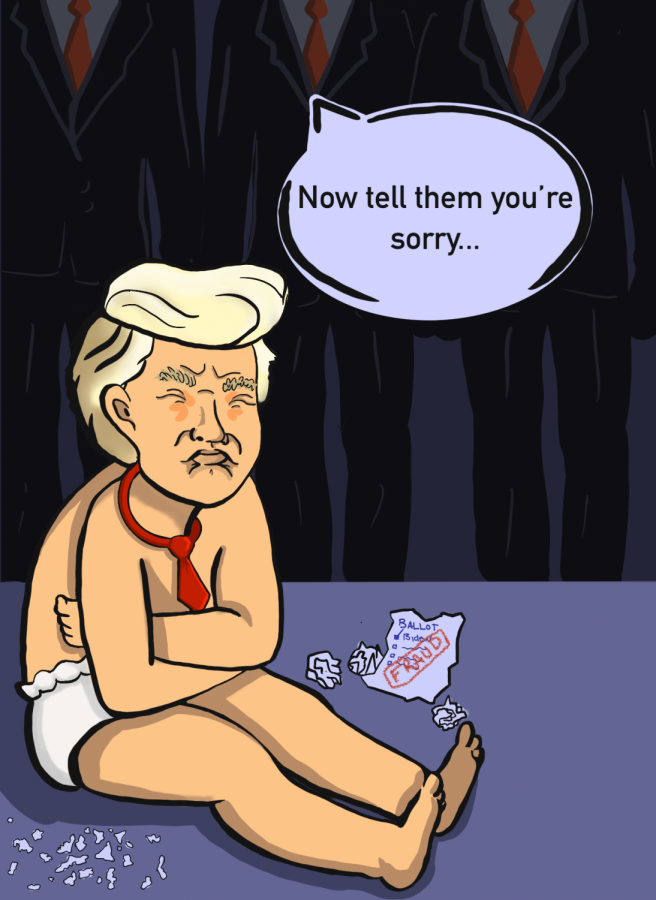 On Wednesday, Jan. 6, as a mob in support of President Donald Trump rampaged through the Capitol, the world observed a crisis unfold that has since been named an “insurrection.” In response to the mob riot at the Capitol on Wednesday, Jan. 6, the House of Representatives has introduced an article of impeachment against President Trump, citing his “incitement of insurrection” as the justifying cause.

After the violent acts of insurrection incited by the President on the U.S. Capitol Building last week, the House of Representatives voted to impeach President Donald Trump on Jan. 13 on one article of impeachment. It was decided in a 232 vs 197 vote, with a record of 10 Republicans joining the unanimous 222 Democratic votes on the count of incitement of insurrection. There is no immediate information about the timing of the second step in the process when the trial moves on to the Senate.

Trump is an immediate threat to the peace in this country and has set a new precedent for a disorderly transition of power. If we do not condemn his actions by bringing him to justice, we are solidifying this precedent and defacing American Democracy.

During the impeachment proceedings, Republicans, in their defense of the charge against Trump claimed that he should not be held accountable for the violence that ensued after his rally 15 blocks from the capitol, because he did not explicitly state for his supporters to break into the capitol and commit acts of vandalism, murder, or trespassing. They stated that the President used his first amendment right to freedom of speech, and that convicting him on his rhetoric would endanger that right. They argued that the language that he used was merely passionate and fiery and that plenty of politicians have used language like that before.

Well, no politicians’ supporters have ever broken into the capitol and defaced it with violent acts that resemble that of a fascist coup. During his speech that day he called for his supporters to “be bold” to give the “weak” Republican members of congress the guts to stand up to the “rigged” election. He also pointed blame at his Vice President Mike Pence, saying that he needed to have the courage to overturn the votes of millions of Americans. The members of the crowd chanted “fight! fight! fight!” in response to this.

Trump was not the only speaker at the rally to use violent rhetoric, his lawyer and former mayor of New York Rudy Guliani spoke of having a “trial by combat” for the people involved in the certifying of electoral votes. Guliani claimed in his own defense that his violent words were a “Game of Thrones” reference. In the transcript of his speech there is no mention of the popular series. What other way could the words “trial by combat” be interpreted? Guliani’s words are explicitly calling for violence here, and after the acts of insurrection seen at the capitol following it, we know what its effects were.

Trump’s call for peace, long after the event was over, shared in the form of a Twitter video, seemed like an apology that a mom would make her youngest child say after they broke a sibling’s toy. It was an empty, disgraceful, and hollow statement.

Trump has been crying fraud since before this election even started, he set the foundation for this insurrection during his first presidential race in 2016. He coined his “fake news” catchphrase that sowed the seeds for the brainwashing of his followers. He created an atmosphere where his supporters would only listen to networks that he endorsed, like Fox News, and what he said was going on, and anyone that went out against him was a part of the fake news media, a non-existing mass conspiracy against him.

The result of this brainwashing can be seen now, even after Trump had filed at least 62 lawsuits across the country trying to overturn the vote and lost all but one. The election committee certified that this was the most secure election in American history, yet his supporters still believe that the election was “stolen” from him. Violence occurring was not just a possibility, but inevitable.

The White House’s official stance on the impeachment is that it would further divide the American people in a time where we need to heal and unify as a nation, and that Trump’s administration has always been about peace, and the ability for Americans to live safely and freely. Trump and his supporters have not displayed the peace and safety that his administration supposedly stands for. After the violent acts that occurred on January 6, this administration can no longer fulfill those claims.

Trump’s administration has never been about unifying the nation, his rhetoric and a majority of his public policies have been a source of the growing divide in our country. To claim now that Trump had never meant for violence to happen is a blatant disregard of who this man is, what he represents, and what he supports. He is a threat to American democracy and a scourge on this nation’s history.