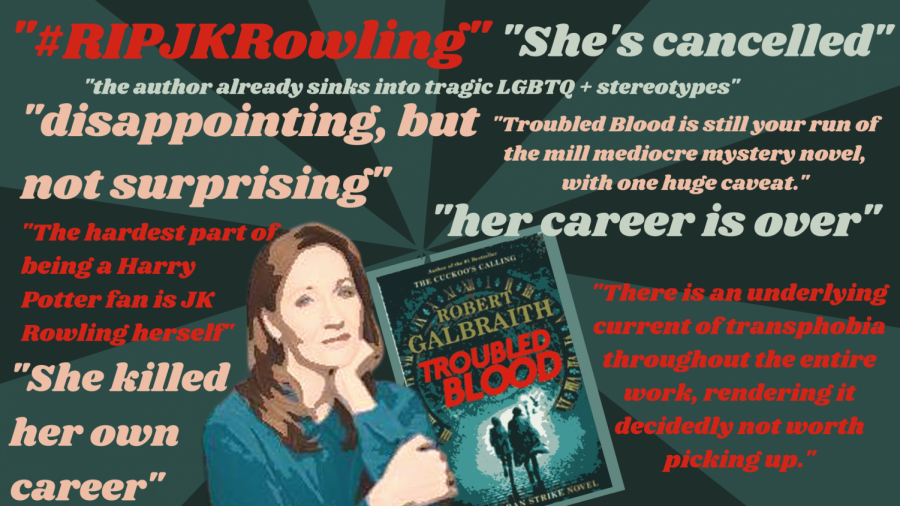 Controversy over J.K. Rowling’s new book, “Troubled Blood,” featuring a male murderer who takes advantage of female victims by crossdressing as a woman himsef, has sparked from comments she made concerning gender and transgender people on Twitter. A hashtag on Twitter, #RIPJKRowling, went up in response to this choice after the book’s release on September 15.

Intentionally or not, the serial killer in “Troubled Blood” reveals a transphobic belief Rowling has that is shared by many other people labeled as ‘TERFs’ (trans-exclusionary radical feminists)—that transgender women are men that want to get into women’s bathrooms. This belief is incredibly offensive and harmful, and it disparages the image of an author who was once renowned for her series “Harry Potter,” that was intensely focused on the themes of love and acceptance.

The most recent criticism Rowling has faced for her transphobic comments began on June 6, when a tweet of hers mocked the use of the term, “people who menstruate.” This was deeply hurtful to not only trans people, trans men who might still menstruate and trans women who cannot, but cisgender women that cannot because of medical conditions or no longer do because of pregnancy or menopause.

This also confines the identities of non-binary people, who vary across the spectrum and do not need to be bound or unbound to the identity of a woman. It confined the identity of a ‘woman’ to a select group and forced people into the identity even when they were not a part of it. This resulted in justified backlash in great volume, and made her feel obligated to further address her comments in later Tweets on the same day.

Rowling then doubled down on her reckless and offensive comments with a further thread, completely misunderstanding the difference between gender and sex or simply treating them as the same thing and generalizing the separate experiences that women and trans people have by asserting that both are mutually “vulnerable” to “male violence.” It is harmful to spread the misinformation that gender and sex are the same thing when sex is the label a person is given based on their genitals and chromosomes, while gender is how a person perceives their own identity, which can be based on societal norms, expectations, how they understand themself, and other complicated factors.

It can take a lot of time for a person to figure themself and their identity out, and Rowling does nothing with her comments but confuse and misinform and harm all that consume them. There is a difference between the biological sex that would typically make a person menstruate, and a person’s gender that they may or may not associate with that sex, and by arguing that using the term ‘people who menstruate’ erases a person’s sex, she is essentially making gender and sex out to be the same thing when, clearly, they are not.

What did the greatest number on Rowling’s reputation, though, was her blog post detailing why she felt the need to speak out on gender and sex issues. Throughout the incredibly lengthy post, she exaggerated rates of detransitioning, spread the false idea that trans men are included in feminism because they were “born women,” revealed her belief that trans men transition to escape misogyny, expressed her belief that there was a difference between women and transgender women, and asserted that people assigned male at birth would transition for the sake of getting into women’s facilities.

The list of transphobic ideas she expressed is extensive and provides a view into her perspective that is nothing less than disheartening and disappointing. In truth, detransition rates are actually incredibly low, and the fact of the matter is that reasons for detransitioning are much more varied and complicated than simply ‘regretting the transition’ because the person realized they were not transgender. This false narrative is popularized and spread in order to scare people away from providing trans youth the things they need to feel comfortable in their skin.

Furthermore, she claims to support transgender people even as she makes it clear that she does not truly view transgender people as the genders they identify as; she instead makes statements about trans men being inherently included in the feminist movement because they were born female; she instead makes statements about trans women needing to understand that there is a ‘difference’ between them and cisgender women when that creates a separate identity that isolates trans women from ‘cisgender’ womanhood.

She further perpetuates this harmful belief by going on to claim that it is dangerous to open bathrooms to all women, cisgender and transgender, because that would allow, in her eyes, male sexual predators to claim to be trans women so they could go into women’s bathrooms and prey on the women inside. This reveals her inability to separate trans women from their assigned sex at birth despite insisting otherwise.

This is a belief that isn’t even backed up by substantial evidence, as places that have already passed such laws protecting trans people’s rights to use the correct bathrooms have not observed a noticeable rise in sexual assault or rape cases afterwards. Rather, this argument appears to be more of a cover to hide an individual’s true beliefs about allowing trans people the rights to enter the correct bathrooms that they are entitled to using. With these deeply troubling and transphobic beliefs circulating in her head, there is no doubt that this brings up concerns in how she expresses these ideas in her writing.

In the book series Rowling is currently publishing under the pen name Robert Galbraith, the Cormoran Strike novels, red flags have popped up in her the way she has written characters in order to project her beliefs onto her novels. The second novel of this series, “The Silkworm,” features a transgender woman named Pippa, who is characterized as violent and unstable enough to attempt to murder one of the protagonists. While the characterization of Pippa alone might stand on shaky grounds for whether or not Rowling is transphobic, the statements she released on Twitter and in her blog and the offensive ideas she expressed through her fifth novel in the series, “Troubled Blood,” corroborate those suspicions.

After having expressed her fears that some transgender women using women’s bathrooms could end up being mae sexual predators taking advantage of the rights granted to trans people, she writes these ideas into the murderer in “Troubled Blood,” Dennis Creed.

Dennis Creed was a dangerous and particularly nasty murderer who was known to kidnape, rape, murder, and behead women. This viciousness in his character is worsened when another detail is brought to light: he sometimes crossdressed as a woman to get closer to his female victims.

What Creed functions as is a tool to serve Rowling’s transphobic narrative concerning the dangers of allowing transgender women into women’s bathrooms. Through the transphobic views Rowling expresses in her newer books, she has hurt and disappointed audiences that once idolized her and the accepting and loving message of “Harry Potter,” particularly fans that are in the trans community.

It is deeply saddening for me to see someone I idolized so much as a child end up so misguided and hateful towards people different from her, and the best solution that can be offered in this situation is for her to truly take a step back. There should be no expectation from her or anyone else that Rowling should receive forgiveness for the hurt she has already spread with her words and beliefs, but if she hopes to make any sort of amends, she needs to reflect on the error in her ways and how she can take actions to atone for her crimes.

With the platform she still clearly holds despite her wrongs and controversy, she could use her voice to spread a message of love, understanding, and acceptance, rather than continuing to draw division lines between people meant to be united rather than separated. The impact of her words will be great regardless of her standpoint on such sensitive issues, and the best thing she can hope to do at this point is to use her platform to reverse the misinformation she has already spread and work to right the wrongs she has done to the trans community.