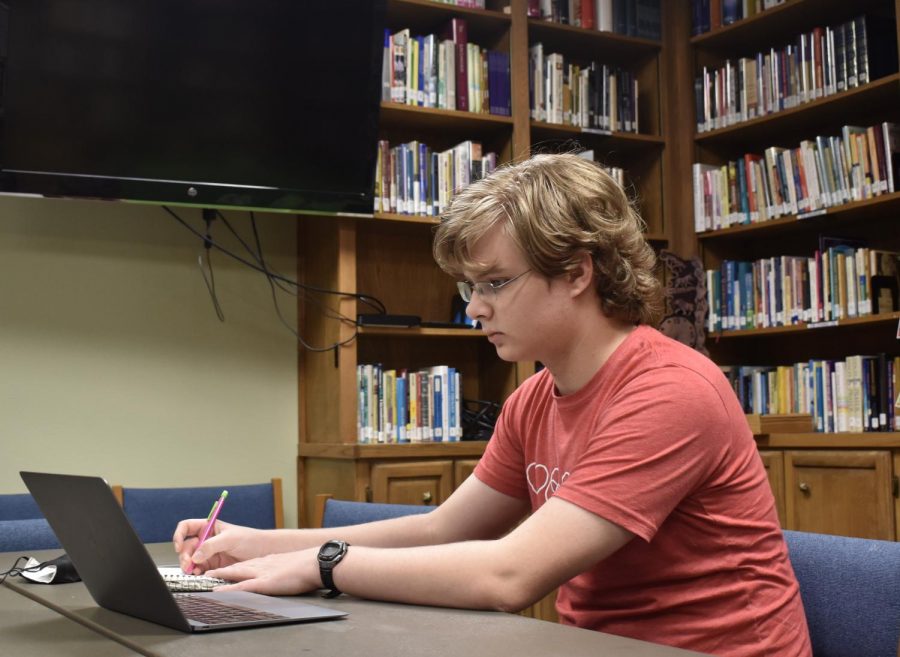 Junior Chris Thompson participates in remote learning from his father’s office after Google Fiber's service was disrupted at his home. On Sept. 11, Google Fiber had several outages across the nation, causing students to seek alternative methods of internet connection to complete online class work.

A student’s computer screen, displaying all of the people in their first period Zoom meeting, suddenly freezes. Moments later, the audio cuts out. A message pops up over the now-frozen faces of their classmates: “Please check your network connection.” Panic sets in.

For many students in Austin on Friday, Sept. 11, this situation was a reality. Starting at around 9:30 a.m. that morning, Google Fiber outages were reported across the country, most notably in Kansas, Tennessee, and Texas. In Texas, Austin had the largest amount of outages, followed closely by Houston, San Antonio, and Dallas. These outages were an issue for many students in the Austin Independent School District (AISD) who use Google Fiber as they were trying to settle into their first week of online classes.

“I was in Computer Science when suddenly the Zoom crashed and I couldn’t connect to any websites,” Thompson said. “I connected to my phone’s hotspot to try to get back into the Zoom meeting, which kind of worked but the audio and video were extremely choppy.”

Students were not the only ones affected by the outage, however. Many teachers also lost internet service as they were trying to finish out their first week of remote instruction.

“I was about to start my first period class on Zoom,” Spanish teacher Sandy Best said. “I noticed emails from students had started to flood in about being unable to connect [and] they were using their phones to email me. It was really sad when I started the session and only a few students were in my waiting room. Eventually, more showed up but only half of the class was able to attend that period.”

While it is unclear exactly what caused the extended outages across the country, Google Fiber mentioned that their team was trying to repair a major fiber line break. This break caused many people in Austin to be without internet for a full day.

“I’ve heard that a main line got cut, and once that was fixed they had to reconnect all of the sub-networks,” Thompson said. “I think it was just over 24 hours total [until they fixed it].”

In order to participate in Zooms and complete work for online school, some students elected to connect to their phone hotspots, which use data to connect to the internet and do not require WiFi. Other students drove to the Bowie parking lot in order to connect to the school WiFi, which was still running. Some even flocked to local businesses that offer free WiFi such as Starbucks, Panera Bread, and BurgerFi. Senior Kellen Watts initially chose the latter option.

“I went to BurgerFi with some friends who also lost their WiFi, but the BurgerFi WiFi didn’t really work so we ended up getting on our phone hotspots,” Watts said. “I felt safe from COVID-19 [while at BurgerFi] because we were outside.”

After attempting to use his phone hotspot to continue attending Zoom meetings and doing classwork, Thompson decided to try another option to find service.

“I ended up driving to my dad’s office since it has Spectrum for WiFi there,” Thompson said. “No one else was at the office except for my dad, so I felt pretty safe being there for a few hours.”

Because of these alternative options and the hard work of many teachers to keep teaching, many students were able to go about their school day like normal.

“Luckily all of my teachers had WiFi,” Watts said. “I didn’t feel like my ability to do work was too impaired because I still made it to all of my classes.”

Internet issues are inevitable in this period of remote learning. AISD and Bowie teachers are aware of this and are working hard to prevent them, as well as accommodate students who are facing issues.

“I’m not sure what we could do differently [during future Internet outages] except make it clear to students what they should do if and when these things happen,” Best said. “I have, however, started religiously turning my computer off after work. I really don’t want to have technology issues, so I decided I better let it rest whenever I can.”

Despite all of the hardships this Google Fiber outage presented to both students and teachers alike, there were solutions that allowed online learning to continue, even if it looked slightly different for some.

“One positive thing that came out of this for me is that it reminded me to relax a little,” Best said. “Glitches, network outages, and BLEND issues are going to happen. We have to be understanding and patient. Many of my students were freaking out and I realized how much they really care about being present and doing a good job. It was important that I remind them that everything is okay and that we are in this together.”