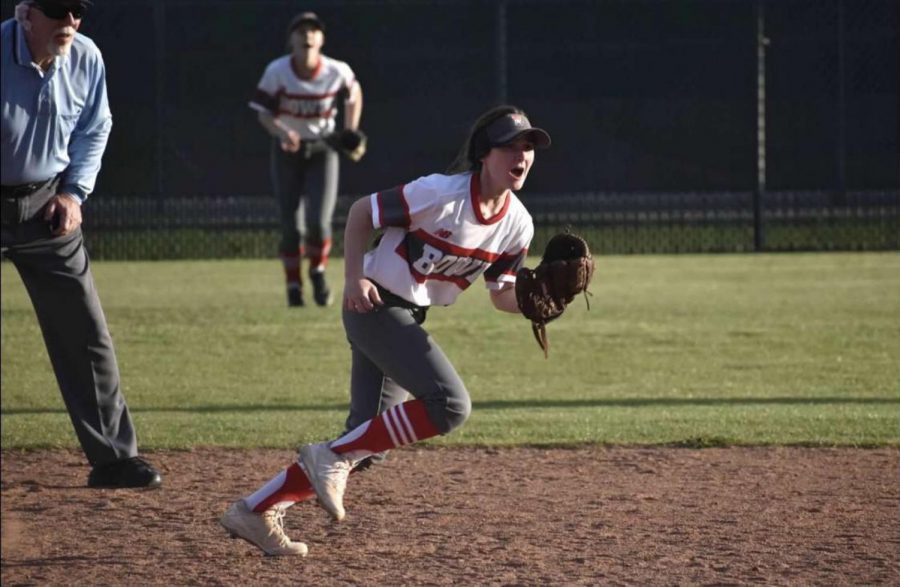 Senior Emily Lear runs across the field with her eyes on the ball. She played middle infield and outfield on varsity before the season was cut short.

Bright lights, tough games, big crowds, and bus rides are things that softball players experience often. However, this season was different than most as a result of COVID-19, for senior team members, such as Emily Lear, had their final season come to an end after only four district games.

“We got through our preseason and played a few district games,” Lear said. “The team has amazing talent and potential, so I had high hopes for the season.”

As a middle infielder and an outfielder for varsity, Lear was really hoping she could lead the team this year and make her last year count.

“With being a senior came the responsibility of being a leader and a role model for the girls,” Lear said. “The hardest part has been coming to terms with the fact that I played my last softball game at Bowie. I could dwell on not having a senior practice or a senior night, which have both bummed me out, but mostly taking my last season for granted and not appreciating what was my last game.”

The short season and abrupt ending also took its toll on the juniors on varsity.

“For me personally, of the three years I have played here, this is the closest I’ve been with the senior class and not being able to spend the rest of that time with them and give them a proper goodbye is definitely heartbreaking,” junior pitcher Jada Scott said.

Junior centerfielder and lead off Abbey Smith expressed her disappointment that she did not get much quality playing time with the seniors, especially since she was unable to play in the first few district games.

“I was battling an injury and could not be in every game,” Smith said. “I got released to play the day our season got postponed and then cancelled. I will miss the fact that I never got closure with this team and did not know when my last game was going to be with them.”

Softball coaches Elizabeth Wissel, Karl Lauer, and Ashlea McGill have been keeping in touch with the team through Zoom and discussing plans for next year’s season.

“Our coaches have definitely been super supportive during this period of time,” Scott said. “We have had a few Zoom calls as a team which have been uplifting and we have been encouraged to continue working out on our own and stay in shape for the Fall.”

As Scott explained, players are having to find different ways to practice and stay in shape since most fields are not open.

“I am preparing for next year by running and working out almost everyday to stay in shape,” Smith said. “However, considering the fields are closed, it is very difficult to actually practice skills. I have been doing some at home drills and going to Circle C Park to try to have space to work on stuff.”

Both Scott and Smith expressed that they are thankful for the little time they had with the senior class this year.

“This team was incredible,” Scott said. “The seniors had such a positive, bright influence on all of us this season, and I hope that we can all carry our friendships into next season and learn to not take anything for granted.”

Lear has been struggling to come to terms with the end of her softball career, especially since she did not get to experience her senior night, senior banquet, and senior practice.

“The main thing I have been doing about it is looking back and appreciating all the fun I had and everything I learned through Bowie Softball,” Lear said. “I will not be playing competitively in college, but I have been throwing the ball and working out everyday just to keep routine. It has been hard for me to let that part go.”

Although she feels disheartened about the loss of her senior season, Lear explained she has enjoyed her time on the softball team and will forever cherish the experiences she had playing.

“I would like to say thank you to Wissel, Lauer, and McGill for making my four years at Bowie the best time ever,” Lear said. “I have learned so much through [their] coaching and I will miss [them]. I love [my teammates] and will miss everyone with all my heart.”