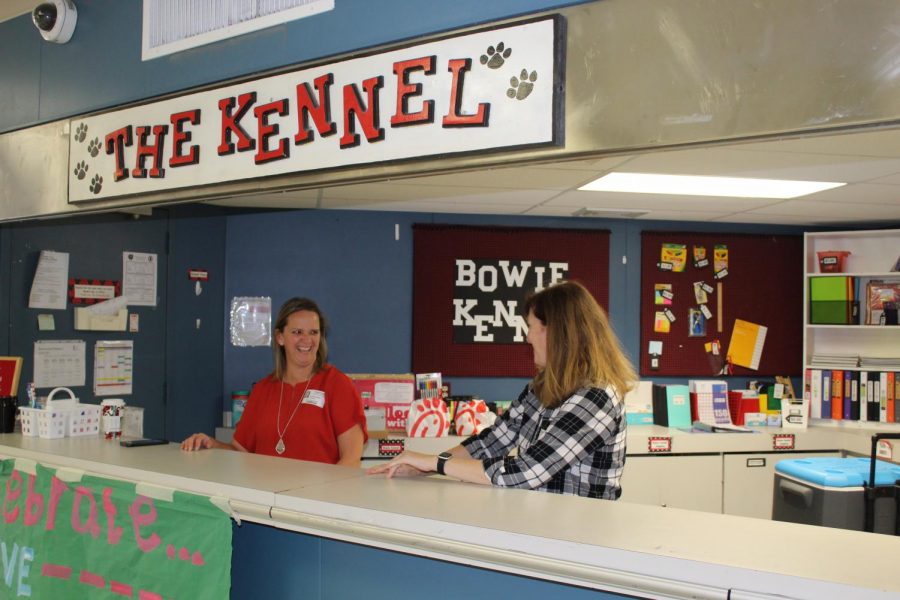 Every week day, two or three people come to the school, raise the metal rollup door, and open the Kennel. Students don’t normally use it; they just know that it’s there, but they aren’t exactly sure what it is. Some believe it is a school store, others think it’s a volunteer fundraiser, and some feel that it is something else entirely, but what really is the Kennel?

The Kennel is a service sponsored by the Parent Teacher Student Association where volunteers sell basic school supplies during both lunches. Bowie moms Jean Lopez and Nina Wasserburger co-lead and work at the Kennel.

The Kennel is located in the Fine Arts building near the gym. Many people go there just to buy homecoming tickets, but there is a much larger variety of items they sell.

“We have music notebooks, sketch books, protractors, calculators, pens, pencils, highlighters, tape, really any kind of supply that you might need,” Lopez said. “We also have deodorant, toothpaste toothbrushes, dry shampoo, lotion, [and] hand sanitizer, stuff that you might not necessarily need, but want.”

The Kennel uses the budget the PTSA gives them to buy items to sell. The money then goes back to the PTSA for them to use for the large school events they host.

“The Kennel only raises a nominal amount of money,” Wasserburger said. “The Bowie PTSA supports this school through the annual Build up Bowie campaign, the Bowie Cares Program, teacher appreciation events, and some teacher development fees.”

Surprisingly, there are students that don’t know what the Kennel offers. Some are aware that it sells school supplies, T-shirts, and football tickets, but they don’t know what else.

“Honestly, I don’t know enough about what they sell,” senior Connor Hurd said. “I’ve only really ever used [the Kennel] to get homecoming tickets.”

There are people have ideas for things that the Kennel could sell. Some students suggested the idea of selling lanyards. Other students think they should sell food and snacks.

“I thought [food was] what they had because it’s called the Kennel, but I guess not,” freshman Wesley York said. “That would be nice.”